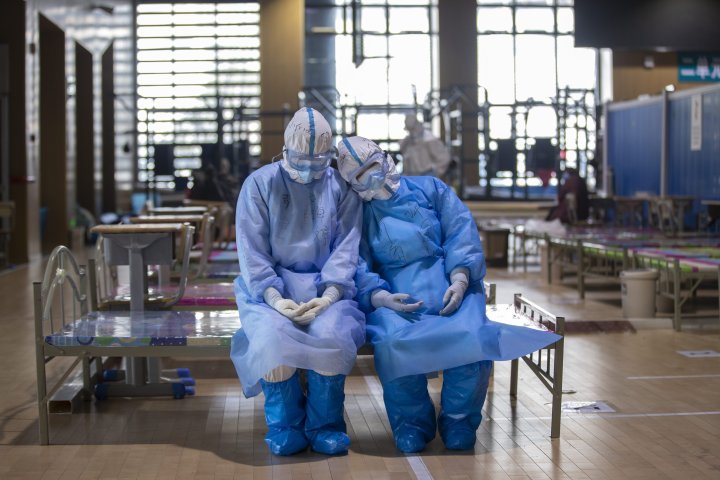 Thursday was a day of contrasts on the front lines of the battle against the new coronavirus. In a sign of hope, the Chinese city of Wuhan reported no new homegrown infections, but in a stark warning for the world, Italy appeared set to surpass China’s death toll from the virus.

The two milestones were a dramatic illustration of how much the global outbreak has pivoted toward Europe and the United States. They also showed how the arc of contagion can vary in different nations, as Italy with 60 million people braces to see more carnage than China, a nation of 1.4 billion.

Italy registered 2,978 deaths on Wednesday after another 475 people died. Given that Italy has been averaging more than 350 deaths a day since March 15, it’s likely to overtake China’s 3,249 dead when Thursday’s figures are released at day’s end.

U.N. and Italian health authorities have cited a variety of reasons for Italy’s high toll, key among them its large elderly population, who are particularly susceptible to developing serious complications from the virus. Italy has the world’s second oldest population after Japan’s and the vast majority of Italy’s dead — 87% — were over age 70.

In the United States, the Centers for Disease Control and Prevention says 80% of the nation’s 138 deaths have taken place in people over 65. Overall, 8,900 patients have died around the world, and 84,000 have recovered. Aside from the elderly and the sick, most people only have mild or moderate symptoms, like a fever or cough.

You should also READ  COMMENTARY: Japan caught in the grip of a virus delivered by sea and air

In the meantime, the news from China’s central city of Wuhan, where the virus first emerged late last year, offered a rare glimmer of hope and perhaps a lesson in the strict measures needed to halt its spread. It came as President Donald Trump likened the fight to “a war” and invoked emergency powers that allow him to compel manufacturers to deal with the pandemic.

Wuhan once was the place where thousands lay sick or dying in hurriedly constructed hospitals, the first place in the world where medical facilities appeared overwhelmed. But Chinese authorities said Thursday that all 34 new cases recorded over the previous day had been imported from abroad.

“Today, we have seen the dawn after so many days of hard effort,” said Jiao Yahui, a senior inspector at the National Health Commission.

While China did not report any new cases in Wuhan or Hubei province, it did record eight additional deaths. Wuhan has been under a strict lockdown since January. Officials are moving to loosen travel restrictions, but only inside the surrounding province of Hubei. Wuhan remains cut-off, with only those with special permission allowed to travel in or out.

Still, the virus, which has infected 219,000 people around the world, took its toll elsewhere, both in human and economic terms.

European stock markets were up only slightly after losses in Asia despite a massive 750 billion-euro stimulus package announced overnight by the European Central Bank. Oil dropped below $21 a barrel Wednesday for the first time since 2002, and rose slightly Thursday to $23.

You should also READ  Coronavirus: Acting U.S. ambassador to Canada defends Trump’s decision on WHO funding

The United Nations warned that the crisis could lead to the loss of nearly 25 million jobs around the world.

Could there be a second wave of coronavirus? Experts say it’s possible but unclear