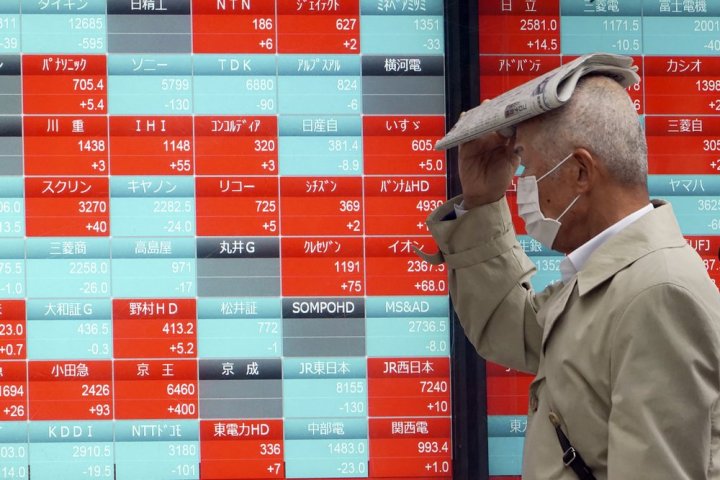 U.S. futures dropped more than 4 per cent and Australia’s share benchmark initially plunged 8.5 per cent as work on more stimulus for the U.S. economy hit snags in the U.S. Senate.

Shares dropped more than 4 per cent in Hong Kong and 5 per cent in South Korea. The Shanghai Composite index lost 2.6 per cent. However, Japan’s Nikkei 225 index held steady, gaining 0.5 per cent in early trading Monday.

Top-level negotiations between U.S. Congress and the White House continued after the Senate voted against advancing the $2 trillion economic rescue package.

The Democrats said the bill was tilted too much toward aiding corporations and would not do enough to help individuals and healthcare providers.

Markets reopened after the weekend to an altered business landscape as lockdowns and closures intended to halt the spread of the new coronavirus expanded to include many cities around the world and the number of people infected surged past 300,000.

Sydney’s S&P/ASX 200 was trading 7.8 per cent lower at 4,443.00 after plunging sharply just after the open. Australia announced at 66.4 billion Australian dollar ($38.5 billion) stimulus package on Sunday. That’s in addition to an earlier mandated $10 billion package and other stimulus from the central bank.

Stocks fell sharply on Wall Street and the price of oil sank again Friday as New York became the latest state to mandate that nearly all workers stay home to limit the spread of the coronavirus. California and several other states have also imposed limits on business activity.

The week will bring fresh data that are likely to underscore the damage to economies from the outbreak of the virus that originated in China.