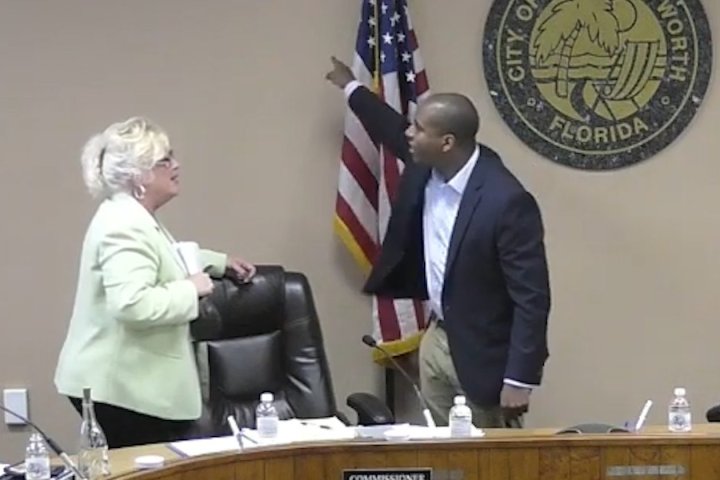 A Florida councillor accused his city mayor of running a “banana republic” after shutting off some residents’ utilities amid the coronavirus pandemic, in an epic tirade that has been watched millions of times online.

Commissioner Omari Hardy delivered the fiery speech at the tail end of a city council meeting in Lake Worth Beach, Fla., last Thursday, after other lawmakers refused his request to hold an earlier emergency meeting to prepare for the COVID-19 outbreak.

“We cut off people’s utilities this week, and made them pay what could have been their last cheque to us to turn their lights on in a global health pandemic!” he shouted at other lawmakers in the meeting, which was captured on the city’s YouTube channel.

Hardy had wanted to give people a break on their delinquent bills during a state-wide lockdown to prevent the spread of the COVID-19 disease. However, city leaders refused to hold an emergency meeting to discuss Hardy’s idea earlier last week, the Palm Beach Post reports.

City manager Michael Borenstein admitted in the meeting to turning off power for 50 customers last Tuesday, just before the city put a moratorium on utility shut-offs.

“Can we do better? There’s always things that pop up that we can do better on, and I call the question,” Vice Mayor Andy Amaroso says in the meeting video.

Hardy then interjects, saying that he hasn’t been given a chance to speak about the issue. He also denounces both Amoroso and the mayor, Pam Triolo, for trying to silence him with rules they “came up with” at the beginning of the meeting.

“This gentleman has turned off people’s lights in the middle of a global health pandemic,” Hardy says of Borenstein, before turning his criticism on Mayor Triolo.

“This is a banana republic that you’re turning this place into, with your so-called leadership,” Hardy says to Triolo.

Triolo previously gave Borenstein emergency powers to run the city, even though she had not called a state of emergency, the Palm Beach Post reports.

Hardy also accused Triolo of dragging her feet on many preventive measures to slow the spread of the virus, such as closing their beach or banning public gatherings.

“We should have been talking about this last week,” he says. “But you didn’t care about that and you didn’t want to meet, but every other year you go around and beg people for their votes.”