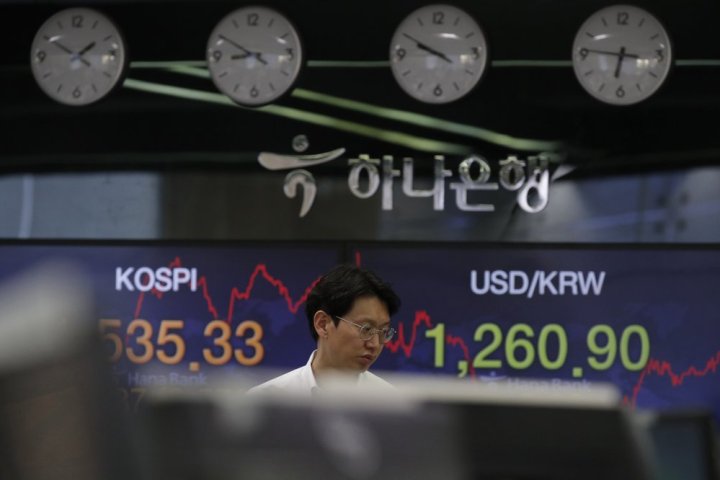 Japan’s Nikkei 225 surged 8 per cent and other world markets also jumped Wednesday after U.S. Congress and the White House reached a deal to inject nearly $2 trillion of aid into an economy ravaged by the coronavirus.

The advances followed the best day since 1933 for the Dow Jones Industrial Average, which rocketed 11.4 per cent higher on Tuesday.

Tokyo logged its biggest daily gain since 2008. Share prices there were lifted also by the decision to postpone the 2020 Olympics to July 2021 in view of the coronavirus pandemic, which has brought travel almost to a standstill and is leaving many millions of people ordered to stay home to help contain the outbreaks.

The postponement alleviated fears the event might be cancelled altogether.

The gains this week have been a respite from a brutal month of nearly nonstop selling. But with cases of the virus still climbing, investors are leery of saying markets have hit bottom. Rallies nearly as big as this have punctuated the last few weeks, none lasting more than a day.

You should also READ  Could there be a second wave of coronavirus? Experts say it’s possible but unclear

The breakthrough on the sweeping $2 trillion measure to aid American workers, businesses and a health care system strained by the rapidly spreading coronavirus outbreak was an expected but welcome boost to sentiment.

The deal was announced shortly after midnight and follows days of often intense haggling and mounting pressure. It still needs to be finalized in detailed legislative language, but would give direct payments to most Americans, expand unemployment benefits and provide a $367 billion program for small businesses to keep making payroll while workers are forced to stay home.

“Given the enormity of the package, it will most certainly be well initially well-received as it should be sufficient to avoid buttress ‘Main Street’ from falling into worst-case, depression type scenarios, especially with the Fed prepared to monetize all the US government’s debt,” Stephen Innes of AxiCorp. said in a commentary.

Pressure was on Congress to act after the Federal Reserve has done nearly all it can to sustain markets.