‘We’ve ventured into a battle’: Inside New York’s ERs as they fight COVID-19 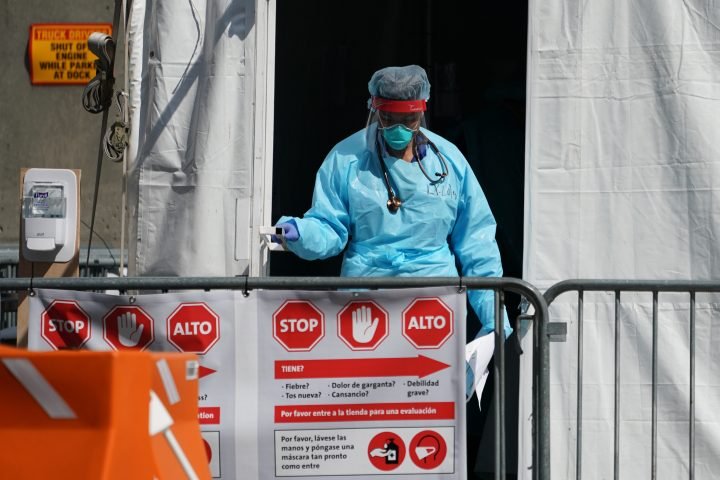 NEW YORK — A “cacophony of coughing” in packed emergency rooms. Beds squeezed in wherever there is space. Overworked, sleep-deprived doctors and nurses rationed to one face mask a day and wracked by worry about a dwindling number of available ventilators.

Such is the reality inside New York City’s hospitals, which have become the war-zone-like epicenter of the nation’s coronavirus crisis.

Faced with an infection rate that is five times that of the rest of the country, health workers are putting themselves at risk to fight a tide of sickness that’s getting worse by the day amid a shortage of needed supplies and promises of help from the federal government that have yet to fully materialize.

“You’re on 100% of the time — no matter what,” said Dr. Jolion McGreevy, medical director of The Mount Sinai Hospital emergency department. “It’s been a month of full force, and that’s certainly very stressful.”

Patients initially showed up with fairly mild symptoms, ranging from a runny nose to a mild fever, concerned they contracted coronavirus. That shifted over the past week, McGreevy said, and now hospitals are receiving far sicker patients in need of life-saving intervention.

“These are people in severe respiratory distress, needing to be intubated and needing the intensive care unit,” he said. “We knew it was coming. We saw it in Italy and other places so we were prepared for it, and now we’re seeing it.”

You should also READ  China frustrated WHO by delaying coronavirus info, despite public praise: sources

Columbia University chief surgeon Dr. Craig Smith wrote in a note to colleagues: “To think we could mimic Italy seemed risible a week ago. Not today.”

Nearly 14,800 people in New York City have been diagnosed with coronavirus as of Tuesday, accounting for more than half the cases in the hardest-hit state in the nation.

More than 2,800 people in the city were hospitalized because of the virus — double the figure from three days earlier — and more than 600 were being treated in intensive care. The death toll rose to 192, and officials from the governor on down warned it will get worse before it gets better.

“We are not slowing it. And it is accelerating on its own,” said Gov. Andrew Cuomo, predicting the state could be as close as two weeks away from a crisis that sees 40,000 people in intensive care. Such a surge would overwhelm hospitals, which now have just 3,000 intensive care unit beds statewide.

“One of the forecasters said we were looking at a freight train coming across the country. We’re now looking at a bullet train,” he said.