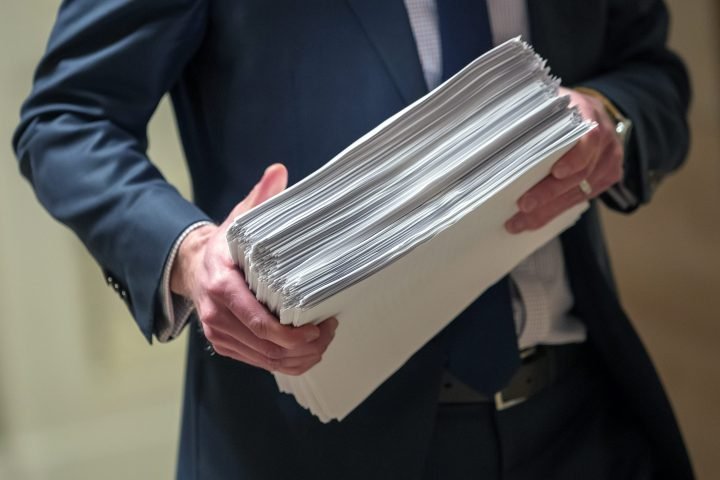 The 883-page measure is the largest economic relief bill in U.S. history, and both parties’ leaders were desperate for quick passage as the virus took lives and jobs by the hour. The Senate stayed in session in anticipation of still passing the bill after days of delays.

Insistently optimistic, U.S. President Donald Trump said of the greatest public-health emergency in anyone’s lifetime, “I don’t think its going to end up being such a rough patch” and anticipated the economy soaring “like a rocket ship” when it’s over. Yet he implored Congress late in the day to move on critical aid without further delay.

The package is intended as relief for an economy spiraling into recession or worse and a nation facing a grim toll from an infection that’s killed nearly 20,000 people worldwide. Treasury Secretary Steven Mnuchin, asked how long the aid would keep the economy afloat, said: “We’ve anticipated three months. Hopefully, we won’t need this for three months.”

Underscoring the effort’s sheer magnitude, the bill finances a response with a price tag that equals half the size of the entire US$4 trillion annual federal budget.

Other objections floated in from New York Gov. Andrew Cuomo, who has become a prominent Democrat on the national scene as the country battles the pandemic. Cuomo, whose state has seen more deaths from the pandemic than any other, said, “I’m telling you, these numbers don’t work.”

You should also READ  Coronavirus drug remdesivir to cost $2,340 per patient in the U.S.

Ardent liberals like Rep. Alexandria Ocasio-Cortez were restless as well, but top Washington Democrats assured them that a fourth coronavirus bill will follow this spring and signaled that delaying the pending measure would be foolish. The sprawling measure is the third coronavirus response bill produced by Congress and by far the largest. It builds on efforts focused on vaccines and emergency response, sick and family medical leave for workers, and food aid.

House. Speaker Nancy Pelosi, D-Calif., swung behind the bipartisan agreement, saying it “takes us a long way down the road in meeting the needs of the American people.”

Working in tandem after days of feuding, Majority Leader Mitch McConnell and top Democrat Chuck Schumer pressed for passage of the legislation in the Republican-led Senate by the end of the day.

Senate passage would leave final congressional approval up to the Democratic-controlled House on Friday. House members are scattered around the country and the timetable for votes in that chamber was unclear.

House Democratic and Republican leaders have hoped to clear the measure for Trump’s signature by a voice vote without having to call lawmakers back to Washington.