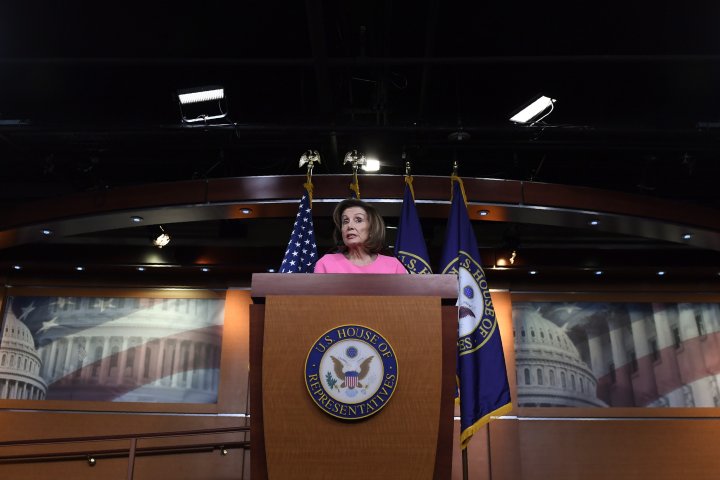 With rare bipartisanship and speed, Washington is about to deliver massive, unprecedented legislation to speed help to people and businesses as the coronavirus pandemic takes a devastating toll on the U.S. economy and health care system.

The House is set to pass the sprawling $2.2 trillion measure on Friday morning after an extraordinary 96-0 Senate vote late Wednesday. President Donald Trump marveled at the unanimity Thursday and is eager to sign the package into law.

The relief can hardly come soon enough. Federal Reserve Chairman Jerome Powell said Thursday the economy “may well be in recession” already, and the government reported a shocking 3.3 million burst of weekly jobless claims, more than four times the previous record. The U.S. death toll has surpassed 1,200 from the virus.

It is unlikely to be the end of the federal response. House Speaker Nancy Pelosi said Thursday that issues like more generous food stamp payments, aid to state and local governments and family leave may be revisited in subsequent legislation.

“There’s so many things we didn’t get in … that we need to,” Pelosi told reporters Thursday.

The legislation will pour $1,200 direct payments to individuals and a flood of subsidized loans, grants and tax breaks to businesses facing extinction in an economic shutdown caused as Americans self-isolate by the tens of millions. It dwarfs prior Washington efforts to take on economic crises and natural disasters, such as the 2008 Wall Street bailout and President Barack Obama’s first-year economic recovery act.

You should also READ  Quarantined at sea: Inside the Japanese cruise ship locked down for coronavirus

But key elements are untested, such as grants to small businesses to keep workers on payroll and complex lending programs to larger businesses. Millions of rebate payments will go to people who have retained their jobs.

Policymakers worry that bureaucracies like the Small Business Administration may become overwhelmed, and conservatives fear that a new, generous unemployment benefit will dissuade jobless people from returning to the workforce. A new $500 billion subsidized lending program for larger businesses is unproven as well.

First the measure must clear Congress. Leaders in both parties had hoped to pass the measure with a sparsely attended voice vote — remarkable for a bill of such magnitude — so scattered lawmakers don’t have to risk exposure by travelling back to Washington.

But now it is feared iconoclastic Rep. Thomas Massie, R-Ky., an opponent of the bill, may seek to force a roll call vote. Democratic leaders summoned members back to Washington, at least those who are able and willing to return.

Friday’s House session will also be unprecedented. Originally scheduled as a non-working “pro forma” meeting, the session will be extended to a debate on the bill — all conducted under social distancing rules to minimize the risk of transmitting the virus.