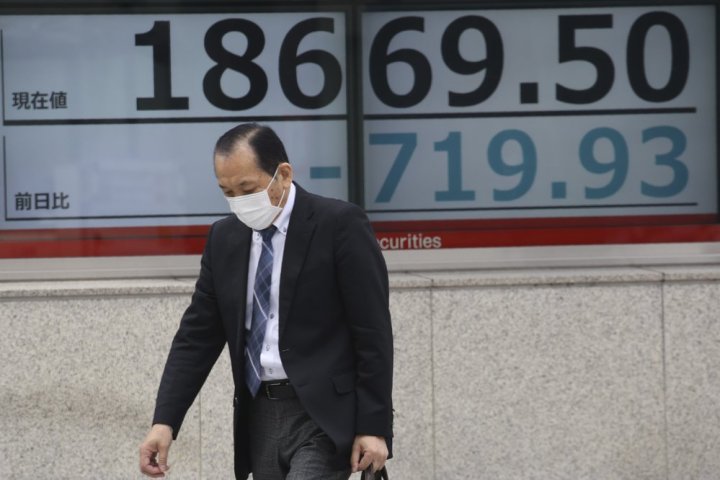 World markets started the week with fresh losses as countries reported surging numbers of infections from the coronavirus that are forcing shutdowns of travel and business in many regions.

Shares fell in London, Paris and Tokyo but surged 7 per cent in Australia after the government promised more recession-fighting stimulus.

“We want to keep the engine of our economy running through this crisis,” Prime Minister Scott Morrison told reporters in Canberra. His unprecedented $130 billion package includes wage subsidies of up to $1,500 per two weeks to businesses to keep workers on the job.

U.S. futures yoyo’d throughout Asia’s day but turned lower. The future for the S&P 500 fell 0.6 per cent while that for the Dow industrials lost 0.8 per cent. Oil prices were lower.

Hopes that a $2 trillion U.S. relief bill would ease the economic havoc brought by the pandemic did little to alleviate the gloom prevailing in many markets.

The pandemic relief bill approved by the Congress and signed Friday by President Donald Trump includes direct payments to households, aid to hard-hit industries like airlines and support for small businesses. Analysts expect markets to remain turbulent, however, until the outbreak begins to wane.

“Sentiment once again took a turn for the worse going into a week of reckoning by means of economic fundamentals,” Jingyi Pan of IG said in a commentary. “The rally seen for Wall Street last week may amount to little more but a relief rally with sentiment turning sour once again going into a fresh week.”

The push to deliver financial relief has gained urgency worldwide as the outbreak widens. The number of cases in the U.S. has now surpassed those in China and Italy, climbing to more than 142,000 known cases, according to Johns Hopkins University. The worldwide total has topped 723,000, and the death toll has topped 34,000, while nearly 152,000 have recovered.