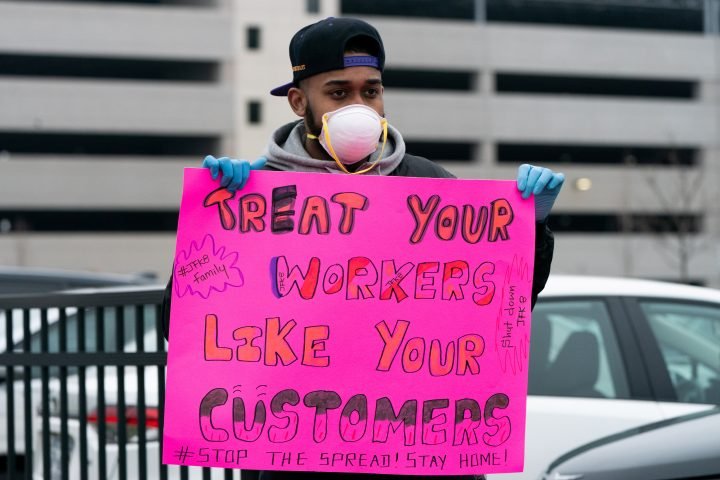 Warehouse, delivery and retail gig workers in the United States went on strike on Monday to call attention to safety and wage concerns for people laboring through the coronavirus crisis.

Among the strikers were some of the roughly 200,000 workers at U.S. online grocery delivery company Instacart, according to strike organizer Gig Workers Collective, founded earlier this year by Instacart worker Vanessa Bain.

Fifteen workers at an Amazon.com Inc warehouse in Staten Island, New York, also walked off the job on Monday following reports of COVID-19 among the facility’s staff. Amazon said later it fired an employee who helped organize the action for alleged violations of his employment, including leaving a paid quarantine to participate in the demonstration.

Workers have also protested in other countries. Dozens of Amazon workers at a facility near Florence, Italy, went on strike on Monday.

From delivery drivers to grocery store clerks, shelf stockers and fast-food employees, workers have kept food and essential goods flowing to people who have been told by their governments to stay home to stop the spread of coronavirus.

More than 738,500 people have been infected across the world and about 35,000 have died, according to a Reuters tally.

Amazon, the world’s largest online retailer, said it has taken “extreme measures” to clean buildings and obtain safety gear and that “the vast majority of employees continue to show up and do the heroic work of delivering for customers every day.” Less than half a percent of its more than 5,000-person workforce at the Staten Island site protested, it said.

In statements on Monday, Amazon disputed comments from one of the striking Staten Island employees, Christian Smalls, who had accused the company of mishandling warehouse operations after a confirmed case of coronavirus.

Amazon said Smalls was on a paid quarantine after having close contact with a diagnosed worker, and had “received multiple warnings for violating social distancing guidelines,” leading to his dismissal.

Smalls responded in a statement distributed by Athena, a labor and activist coalition.