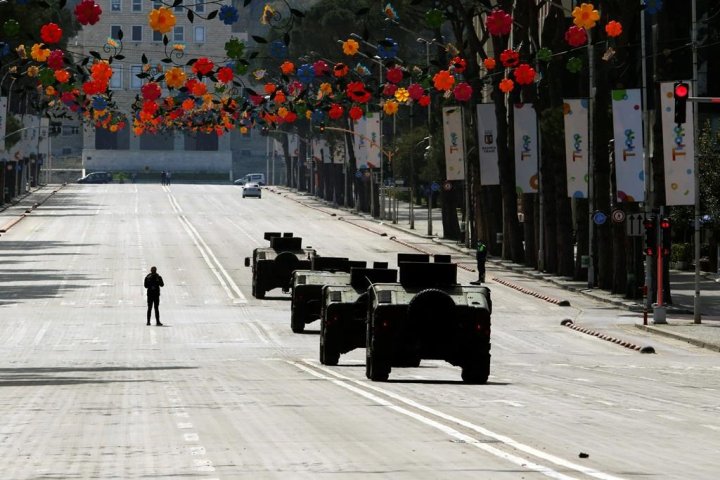 Some Canadians may think the federal and provincial governments are going overboard by using arrests, fines and jail time to urge people to stay inside and away from one another to limit the spread of the coronavirus pandemic.

But as the number of confirmed cases of COVID-19 worldwide soar past one million, other cities and countries are using even stronger and in some cases extreme measures to enforce lockdowns, control narratives and promote certain precautions like wearing face masks.

Even more federal, state and local governments are getting creative in their efforts to get people to pay attention and follow the rules, with some humourous results.

Here’s what officials are resorting to around the world.

Although police departments are working with bylaw officers across Canada to help enforce provincial and federal measures, law enforcement elsewhere are being given far deadlier marching orders.

“Shoot them dead,” Philippine President Rodrigo Duterte said in a televised address Thursday, according to Reuters. He said the message was directed to the police and military if they face “trouble and there’s an occasion that they fight back and your lives are in danger.”

“Is that understood? Dead. Instead of causing trouble, I will bury you,” he added, this time addressing his citizens who he urged to follow home quarantine measures, including poor residents who have been protesting a lack of government aid.

You should also READ  Grocery store employees are essential during coronavirus, but they’re scared

While other world leaders haven’t made such declarations, many police and military forces have turned to violence to get people to obey the rules.

In South Africa, the Associated Press reported officers berated homeless people and beat them with batons mere minutes after a three-week lockdown went into effect, while some citizens reported the use of rubber bullets. Kenyan police sprayed tear gas on hundreds of people trying to reach a ferry ahead of the first night of a national curfew, which the interior ministry defended by calling those who break the curfew “irresponsible.”

Amnesty International and other human rights advocates have called for investigations into those and other violent outbreaks involving police.

Police across Britain have also been criticized for an inconsistent approach to enforcing the national lockdown there, according to Reuters, with some regions reporting officers using a heavier hand than others.

Transport Minister Grant Shapps admitted police had gone “perhaps a bit further than they should have gone” in some cities and towns, from questioning dog walkers on why they had travelled to open areas to fining multiple people from the same household for going to shops.