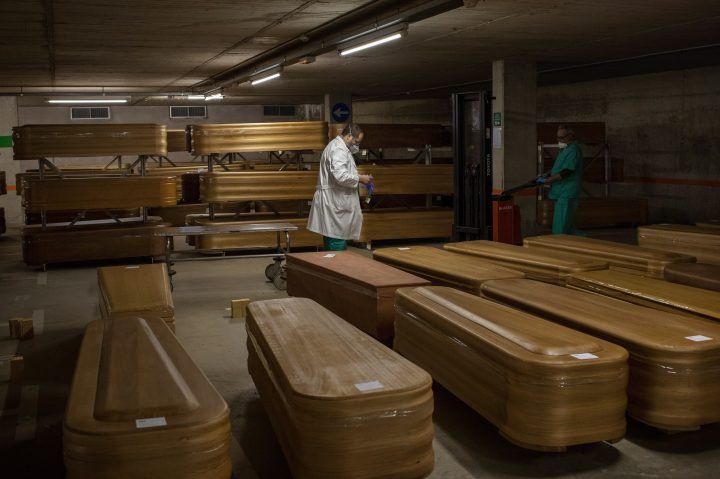 There are the new dead. And then there are the bodies waiting in overcrowded mortuaries to be buried as cities struggle to meet demand and families wrestle with rules on social distancing that make the usual funeral rituals impossible.

Med Alliance Group, a medical distributor in Illinois, is besieged by calls and emails from cities around the country. Each asks the same thing: Send more refrigerated trailers so that we can handle a situation we never could have imagined.

The company has rented all its trailers and there’s an 18-week wait for new materials to build more, she said.

With U.S. medical experts and even U.S. President Donald Trump now estimating the death toll from the coronavirus pandemic could reach 240,000 nationwide, the sheer practicalities of death — where to put the bodies — are worrying just about everyone as cities, hospitals and private medical groups clamour to secure additional storage.

The need is compounded by private mortuary space that is occupied longer than usual as people wait to bury their loved ones — regardless of how they died — because rules on social distancing make planning funerals difficult.

It’s a crisis being repeated worldwide.

In Spain, where the death toll has climbed to nearly 12,000, an ice rink in Madrid was turned into a makeshift morgue after the city’s municipal funeral service said it could no longer take coronavirus bodies until it was restocked with protective equipment. In Italy, embalmed bodies in caskets are being sent to church halls and warehouses while they await cremation or burial.

And in the coastal Ecuadorian city of Guayaquil, macabre images and pleas from families on social media show dead loved ones wrapped in plastic or cloth, waiting for days to be taken away by overwhelmed morgue workers.

In the U.S. epicenter of New York City, where the death toll was nearly 1,900 on Saturday, authorities brought in refrigerated trucks to store bodies. At Brooklyn Hospital Center, a worker wheeled out a body covered in white plastic on a gurney and a forklift operator carefully raised it into a refrigerated trailer.

Cities and states that haven’t been hard-hit yet are trying to prepare for the worst.