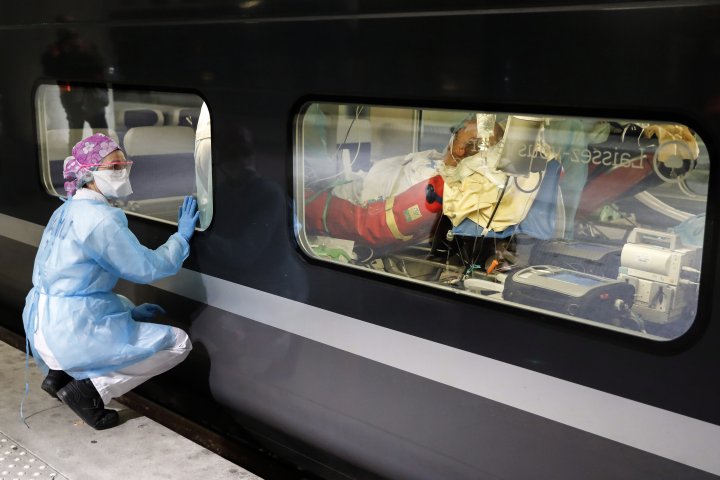 The high-speed train whooshing past historic World War I battle zones and through the chateau-speckled Loire Valley carried a delicate cargo: 20 critically ill COVID-19 patients and the machines helping keep them alive.

The TGV-turned-mobile-intensive-care-unit is just one piece of France’s nationwide mobilization of trains, helicopters, jets and even a warship, deployed to relieve congested hospitals and shuffle hundreds of patients and hundreds more medical personnel in and out of coronavirus hotspots.

“We are at war,” President Emmanuel Macron tells his compatriots, again and again, casting himself as a warrior and harnessing the might of the armed forces to fight this invisible foe.

But while the extraordinary mobilization seems to be helping, critics charge the 42-year-old leader waited far too long to act in the first place. France, one of the world’s wealthiest countries with one of the best health care systems, they say, should never have found itself so deep in crisis.

Macron had just emerged from weeks of damaging retirement strikes and a year of violent “yellow vest” protests over economic injustice when the pandemic hit. Now he is struggling to keep the house running in one of the world’s hardest-hit countries.

The Rungis food market south of Paris, Europe’s biggest, is transforming into a morgue as France’s death count races past 8,000. Nearly 7,000 patients are in intensive care, pushing French hospitals to their limit and beyond. Doctors are rationing painkillers and re-using masks.

You should also READ  U.K. truck driver jailed for 6 months after dangerous turn into oncoming traffic

France’s centralized state and powerful presidency make it easier to co-ordinate the patient-moving efforts, which have crisscrossed the country and even extended to overseas territories. And nearly three weeks of confinement are starting to bear fruit: France reported its lowest number of deaths Sunday in a week, and a slowing growth in infections.

But the pandemic has exposed weaknesses in the world-renowned state hospital system after decades of cost cuts. When the president visited a Paris hospital on the front lines of the virus battle, an angry neurologist challenged him to reinvest massively.

“When it was about saving Notre Dame, many were moved,” Dr. Francois Salachas said, a reference to the Paris cathedral that was severely damaged by fire a year ago, prompting immediate, massive pledges of public and private funds for reconstruction. “This time it’s about saving public hospitals, which are going up in smoke at the same speed as Notre Dame almost did.”

Many think Macron did not anticipate the severity with which the virus could hit and set a bad personal example. Similar criticisms have been levelled at other world leaders including the presidents of Mexico, Brazil and the United States.

In February, Macron made a point of repeatedly kissing Italy’s premier on a visit to Naples to show there was nothing to fear. At the time, the virus was already spreading fast across France, but limited testing meant health authorities didn’t yet know.