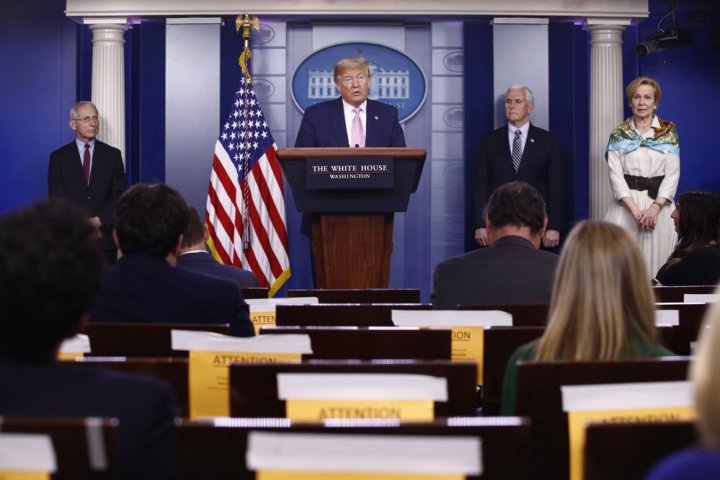 U.S. President Donald Trump is warning that the country could be headed into its “toughest” weeks yet as the coronavirus death toll mounts, but at the same time he expressed growing impatience with social distancing guidelines and said he’s eager to get the country reopened and its stalled economy back on track.

“There will be a lot of death, unfortunately,” Trump said Saturday in a somber start to his daily briefing on the pandemic, “There will be death.”

Trump added a twist on his familiar push for a drug that hasn’t been clearly shown to work to stop the virus — he said he may start taking it as a preventative measure after consulting with his doctor, even though there’s no evidence to show it works for that, either.

The president initially had suggested the country could reopen by Easter but pulled back seeing projections of a staggering death toll even if restrictive measures remain in place. But just days after extending tough national guidelines through the end of April, staring down historic levels of unemployment and economic standstill, he was talking about reopening as soon as possible, and speaking Saturday with leaders of professional sports leagues about filling arenas again.

You should also READ  How vulnerable is Latin America to a COVID-19 outbreak? Here’s what the data shows

“This country was not designed to be closed,” he said. “The cure cannot be worse than the problem.”

The number of people infected in the U.S. has exceeded 300,000, with the death toll climbing past 8,400; more than 3,500 of those deaths are in the state of New York. For most people, the virus causes mild or moderate symptoms, such as fever and cough that clear up in two to three weeks. For some, especially older adults and people with existing health problems, it can cause more severe illness, including pneumonia, and death.

Much of the country is under orders to stay home, including professional sports leagues that were among the first to clamp down in the pandemic. Trump spoke by phone with top leaders including Roger Goodell of the National Football League and the NBA’s Adam Silver, telling them he hoped to get people back in seats as soon as possible.

“I want fans back in the arenas,” he said. “Whenever we’re ready, as soon as we can.”

The virus has decimated the sports world with the National Basketball Association and the National Hockey League suspending their seasons indefinitely and Major League Baseball postponing the start of its season. The NCAA basketball tournament was also canceled; so were college spring sports.

A person with knowledge of the call said some of the commissioners weren’t quite as optimistic as Trump because of the concerns raised by public health officials but appreciated the president’s desire to give people hope and fans a reason to be optimistic. The person requested anonymity to discuss the private call.