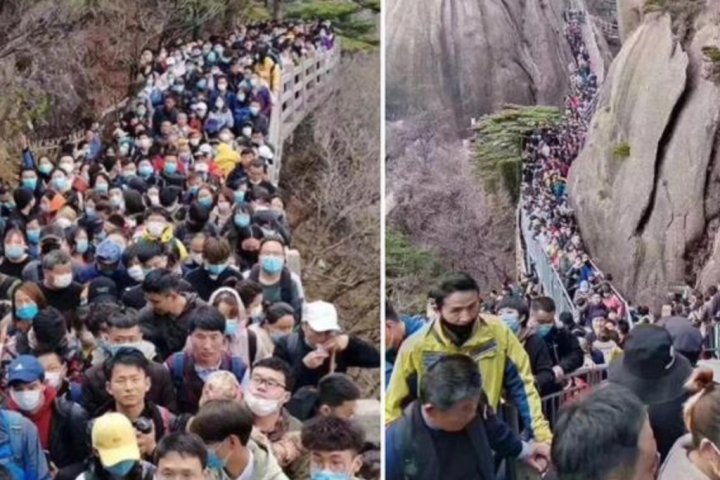 As other countries lock down amid the coronavirus pandemic, China is free after multiple weeks indoors, and people are heading to tourist sites in droves.

Sites were packed during the country’s holiday weekend, despite warnings from health officials that the battle against COVID-19 isn’t over yet, CNN reports.

At 7:48 a.m., officials declared the park at full capacity, according to state media the Global Times. The park allows no more than 20,000 people in per day.

The publication reports that Anhui province has begun a two-week tourism promotion, allowing all 31 of its scenic spots to be visited free of charge from April 1 to 14.

Shanghai‘s famous Bund waterfront was also overwhelmed with visitors, CNN reports, after weeks of being practically empty thanks to the country’s lockdown procedures.

“China is not near the end, but has entered a new stage,” Zeng Guang, chief epidemiologist with the Chinese Center for Disease Control and Prevention, told the Health Times on Thursday, according to CNN.

“With the global epidemic raging, China has not reached the end,” he said.

China, originally the epicentre of the deadly outbreak, was recording thousands of new cases per day at its peak but has seen a lull in new ones lately.

On Monday, only 39 new cases were reported.

The National Health Commission said in a statement on Sunday that 25 of the latest cases involved people who had entered from abroad, compared with 18 such cases a day earlier.