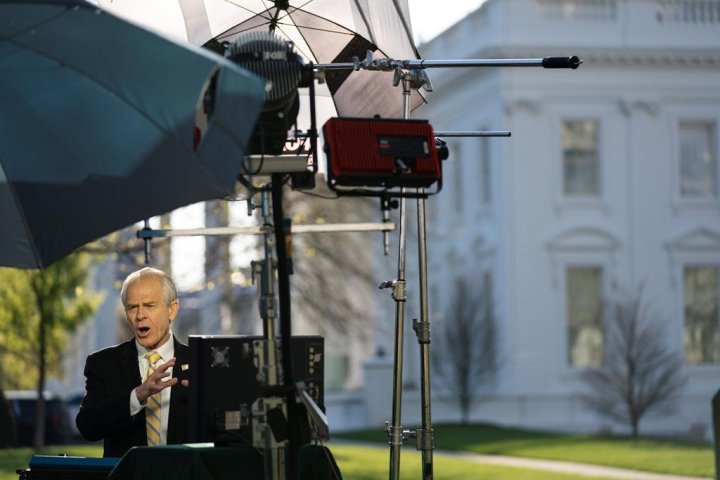 WASHINGTON — U.S. President Donald Trump and members of his administration are growing emphatic in promoting an anti-malaria drug not yet officially approved for fighting COVID-19, even though scientists say more testing is needed before it’s proven safe and effective against the virus

Trump trade adviser Peter Navarro promoted the drug, hydroxychloroquine, in television interviews Monday, a day after Trump publicly put his faith in the drug to lessen the toll of the coronavirus pandemic.

“What do I know, I’m not a doctor,” Trump told reporters Sunday. “But I have common sense.”

The administration’s public backing of the drug comes after a heated Situation Room meeting of the White House’s coronavirus task force on Saturday, in which Navarro challenged the top U.S. infectious disease expert, Dr. Anthony Fauci, over his concerns about recommending the drug based only on unscientific anecdotal evidence.

Navarro, who has no formal medical training, erupted at Fauci, raising his voice and claiming that the reports of studies he collected were enough to recommend the drug widely, according to a person familiar with the exchange who spoke on the condition of anonymity to describe the Situation Room blow-up.

Fauci has repeatedly said that current studies provide only anecdotal findings that the drug works. Navarro told CNN on Monday: “I would have two words for you: ‘second opinion.’”

Hydroxychloroquine is officially approved for treating malaria, rheumatoid arthritis and lupus, but not COVID-19. Small, preliminary studies have suggested it might help prevent the new coronavirus from entering cells and possibly help patients clear the virus sooner. But those have shown mixed results.

Doctors are already prescribing the malaria drug to patients with COVID-19, a practice known as off-label prescribing. Research studies are now beginning to test if the drugs truly help COVID-19 patients, and the Food and Drug Administration has allowed the drugs into the national stockpile as an option for doctors to consider for patients who cannot get into one of the studies.

But the drug has major potential side effects, especially for the heart, and Fauci has said more testing is needed before it’s clear that the drug works against the virus and is safe for use.

Navarro told Fox News Channel’s “Fox & Friends” that doctors in New York hospitals are already giving out the drug to COVID-19 patients and that health care workers are taking it in hopes of being protected from infection. And while he acknowledged the Saturday debate with Fauci, he said the focus was on whether the administration should take 29 million doses of the drug in Federal Emergency Management Agency warehouses and send them to hard-hit cities.

“The media is trying to blow it up as a big big debate, but I can tell you that within the room the decision was a sound one, and it was unanimous,” Navarro said.