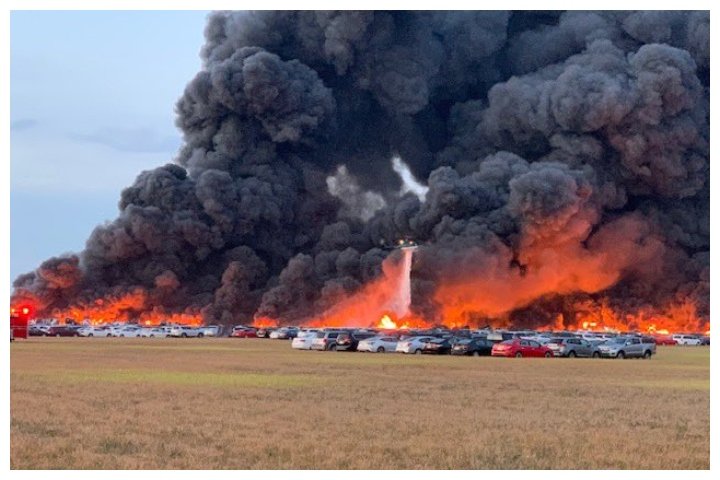 There are plenty of hot deals to find on rental cars amid the coronavirus crisis — except in southwestern Florida, where 3,500 of them just went up in flames.

A brush fire tore through a grassy area near Southwest Florida International Airport in Fort Myers late last Friday, injuring no one but destroying millions of dollars worth of vehicles in its path.

The 3,500 vehicles were parked in an overflow parking lot near the airport, where rental car companies have been struggling to find a place for their glut of unrented vehicles during the COVID-19 crisis.

“We lost count after the hundreds.”

Police and firefighters from across the region responded to the incident. They spent 18 hours trying to control the massive blaze, which sent up a huge cloud of black smoke as it burned through the empty vehicles.

It was ultimately contained by Saturday morning, burning about six hectares, Avni said.

A total of 3,516 cars were damaged or destroyed and another 3,850 vehicles were undamaged by the fire, according to airport spokesperson Vicki Moreland. The blaze did not cause any damage to the airport itself.

Airport management thanked all the first responders who helped put out the fire in a Facebook post.

“We appreciate their courage and willingness to help our Aircraft Rescue and Fire Fighting department,” the post said. “Together we were able to keep all our passengers and airport visitors safe.”

The cause of the fire is still under investigation.

Japanese students virtually graduate thanks to iPads connected to robots