U.S. official who dealt with whistleblower complaint ‘disappointed’ after Trump fired him 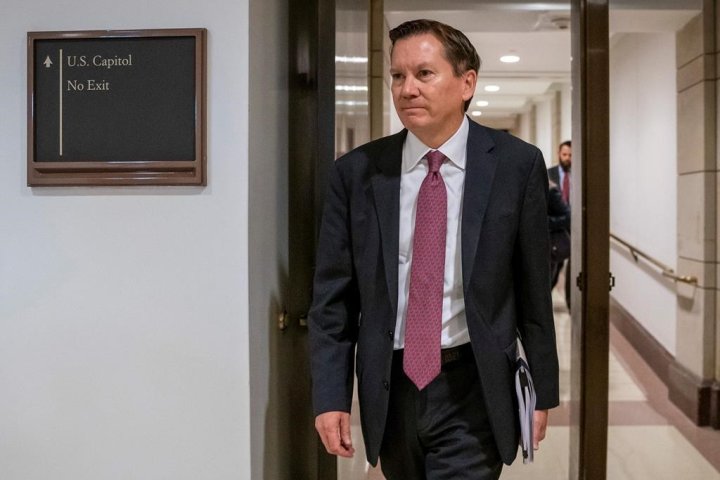 The ousted inspector general of the intelligence community says he is “disappointed and saddened” that U.S. President Donald Trump fired him, but he also encouraged other inspectors general to continue to speak out when they are aware of wrongdoing.

Trump notified Congress late Friday evening that he intended to fire Michael Atkinson, a pivotal figure in his impeachment last year, because he had lost confidence in him.

On Saturday, Trump made it clear that the move had been retaliatory, telling reporters that Atkinson was a “disgrace” and had done “a terrible job” because he had provided an anonymous whistleblower complaint to Congress — a move that was required by law.

Atkinson said in the statement, sent to reporters late Sunday, that “it is hard not to think that the president’s loss of confidence in me derives from my having faithfully discharged my legal obligations as an independent and impartial inspector general, and from my commitment to continue to do so.”

Atkinson was required by law to notify Congress of the complaint, which was written by an anonymous intelligence official and detailed Trump’s pressure on Ukraine to investigate Democrats. The inspector general had deemed it urgent and credible, meaning that he was required to share it with the House and Senate intelligence committees. But the acting director of national intelligence at the time, Joseph Maguire, overruled him for several weeks.

You should also READ  Trudeau campaigns for UN Security Council seat, but analysts say it may be too late

After a firestorm sparked by media reports of the complaint, it was turned over and made public in September, and a congressional inquiry into the matter led to Trump’s impeachment by the House in December. The GOP-led Senate acquitted Trump in February.

Atkinson said in the email that he was legally obligated to “ensure that whistleblowers had an effective and authorized means to disclose urgent matters involving classified information to the congressional intelligence committees,” and that such whistleblowers were protected against reprisal. Trump repeatedly called for the whistleblower’s name to be revealed.

Atkinson also directed his message to other inspectors general, saying that he knows they will “continue to do everything in their power” to continue to protect whistleblowers.

“Please do not allow recent events to silence your voices,” Atkinson wrote.

Atkinson’s statement was sent to reporters by email on Sunday evening and was copied to Alan Boehm, the executive director of the Council of the Inspectors General on Integrity and Efficiency. Boehm confirmed the authenticity of the letter in a follow-up email exchange with The Associated Press.

On Saturday, Trump questioned why Atkinson didn’t speak to him about the complaint, though the inspector general’s role is to provide independent oversight.

“Never came in to see me, never requested to see me,” Trump said. He added: “That man is a disgrace to IGs.”