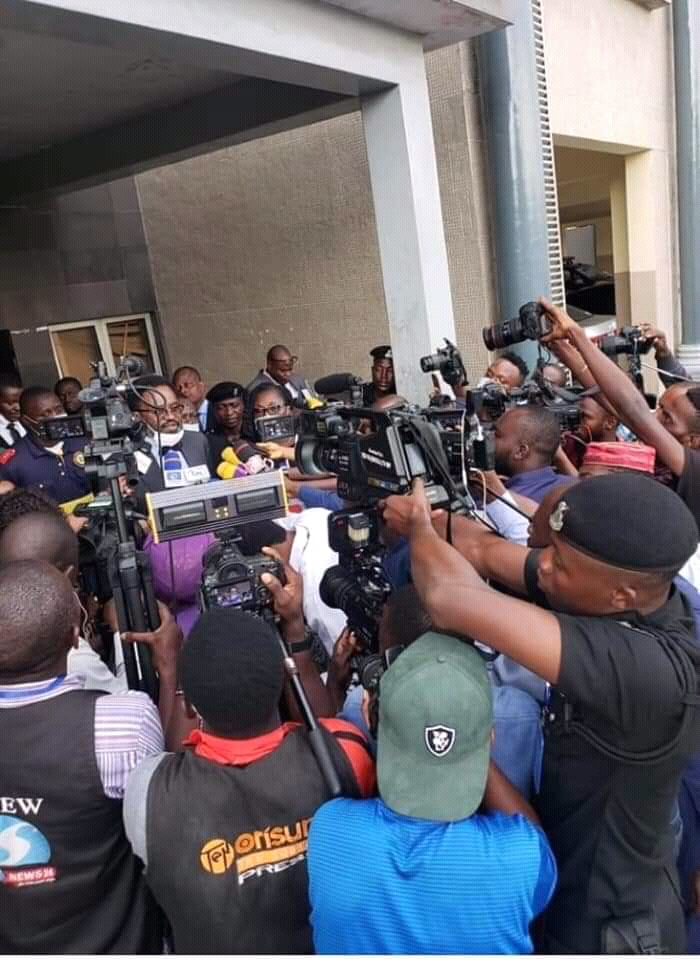 Rather, the DPP proposed on behalf of the Attorney General, Moyosore Onigbanjo SAN that the trio should tender a written apology to Lagos State government, maintain a 14 day isolation, and undertake to continue to obey the regulations set out by the Federal and State government.

You should also READ  Documentary on Oshiomhole’s `dark side’ out Jan. 30 - Ex-speaker

After announcement of appearance, the DPP told the court that even though the state has filed a four count charge before the court, “a few minutes before the court proceedings started, the Attorney General foreworded a directive to me that having considered the remorsefulness of the three defendants, the AG has considered diverting the case out of court based on the defendants fulfilling three conditions.

Mr Oshoala also submitted that this is absolutely necessary “in view of the fact that some individuals who travelled from endangered countries where present at the party. He stressed that the state is not a persecutor but it is always ready to enforce the laws that benefit the interest of the public.
“If they agree to this conditions, the four count charge will be withdrawn and that will be the end of the matter. We will keep it in abeyance.” That’s our submission.

All the lawyers to the defendants acquisced to the terms.

Akoni said: “On behalf of the second defendant, we wish to express our appreciation to the state, the DPP and to confirm to the court that we accept the three conditions”.

You should also READ  Ubani chides Ebonyi gov, Umahi, over wear facemask or be flogged order

Adegboruwa: On behalf of the 3rd def, we express our appreciation to his excellency, Mr President and the Governor, the AG, The DPP and his team, the Police and most of all the court. The third def is a law abiding citizen and accepts all the three conditions as stipulated by the DPP.

Ayinde-Marshall: On behalf of the first defendant, we say a big thank you to the police, the President, Mr Gov and the DPP. My client is a law abiding citizen too and a strict supporter of government policies. We undertake that we will fulfill the three conditions given to them.

DPP: Having agreed to this conditions and having already dealt with the principal defendants, Funke Akindele and her husband, we hereby withdraw the charge before the court. However for the purpose of clarity, I request the defendant to put their phones numbers out so that the personnel from the Ministry of Health can get in touch with them, having agreed to go into self isolation.
Also within today and tomorrow morning latest, the undertakings must reach the AG through their lawyers and the OC Legal to show their sincerity. We are grateful to the court.

The trial magistrate, Chief Magistrate Aje-Afunwa told both parties to follow court rules in the withdrawal of charges. “This honourable court has listened to the request of the learned DPP indicating that the state requests to withdraw the charge on the condition that they fulfill all the conditions as stipulated by the prosecution;

Since the defendants have all agreed to comply with the conditions, I wish to state that the procedure for the withdrawal of a criminal charge is that before the charge is withdrawn, the conditions must be met or be seen to be met;

All the parties agreed had no objections to the terms.

In adjourning the matter, CM Aje-Afunwa said: “Since it was agreed on 24 hours for compliance with the conditions, the court believes 12noon tomorrow is appropriate for withdrawal of the charge. Case is adjourned to 9th April at 12noon for withdrawal or for taking of plea if conditions fail to be complied with;

In line with the regulations of the government, we all must continue to ensure that the regulations are strictly complied with in our homes and in all public places”, she concluded.