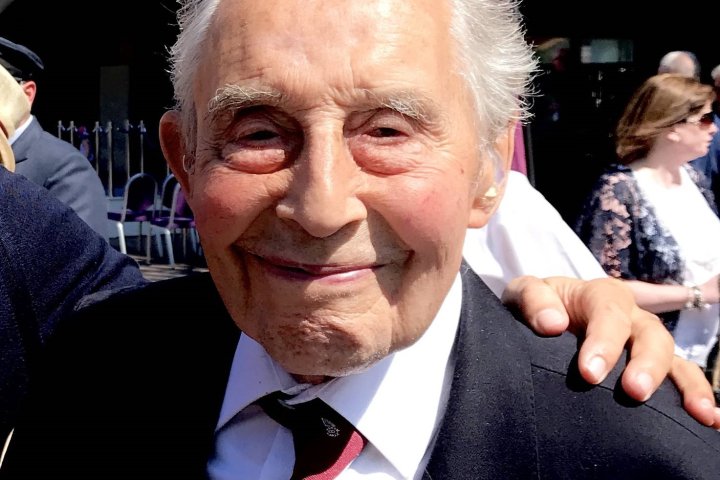 Ken Sumner, Canadian-born veteran of the legendary Dam Busters squadron, who spent almost 200 hours in aircraft fighting Nazi Germany and who was decorated for his devotion to duty, died from the novel coronavirus on April 2.

“He never said much. He was a quiet guy, but when he spoke every single person listened,” said Warwick Shepherd, Sumner’s grandson.

“He was immensely proud and a dogged fighter.”

Sumner died in hospital in the U.K. last week, shortly after being diagnosed with COVID-19.

Shepherd remembers his granddad’s love for his kids or grandkids and his fierce determination.

Shepherd, speaking via Skype from Chester, U.K., told Global News Sumner ran five marathons when he was in his 70s and toured the Great Wall of China in his 80s.

“He didn’t realize it wasn’t a race every day, so he would set off and run ahead of everyone, not thinking it was actually a sightseeing tour.”

“Like most veterans, he was very humble and very quiet about it.”

Shepherd does know that his granddad was once part of the most celebrated bombing squadron in the Second World War.

Ken Sumner was born in Prairie River, Saskatchewan on May 5, 1923. His own father emigrated to Canada to start a farm after fighting in the first World War, but had to return to England during the Great Depression.