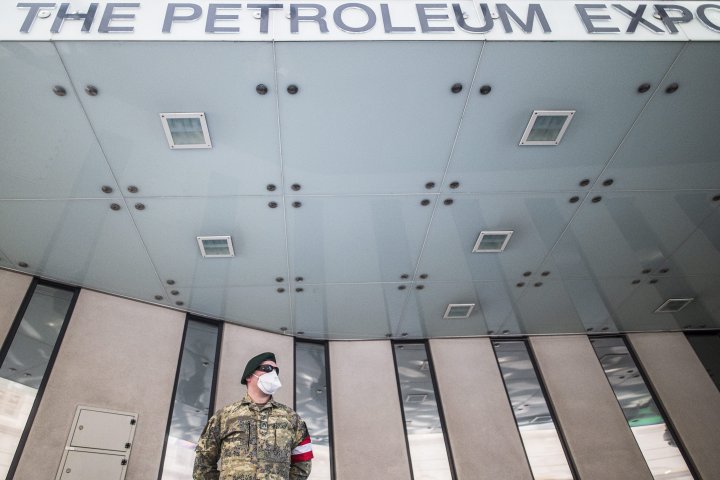 Oil-producing countries including those of the OPEC cartel and Russia are trying to strike a global deal to pump less crude in a bid to limit a crash in prices that, while welcome for consumers, has been straining government budgets and pushed energy companies toward bankruptcy.

Late Thursday OPEC and Russia reportedly had reached a tentative deal to cut production by 10 million barrels per day for two months.

“They’re getting close to a deal that’s OPEC and many other countries outside of OPEC, and we’ll see what happens,” Trump said at a White House news briefing.

“There’s so much production nobody even knows what to do with it, that’s how it’s working,” he added.

Reports of a deal were welcomed by the American Petroleum Institute, which counts most U.S. oil and gas producers among its members.

“While this move will help stabilize world oil markets, significant challenges remain throughout the supply chain since current market disruptions are driven largely by this historic drop in demand as a result of the COVID-19 pandemic,” said Mike Sommers, president of API.

Thursday’s OPEC videoconference was part of a series of talks on stabilizing the market, where oil prices have more than halved since the start of the year amid a pricing war between Saudi Arabia and Russia. The drop was intensified when the coronavirus pandemic caused a further plunge in the demand for oil as travel and business ground to a halt globally.

Kremlin spokesman Dmitry Peskov said Thursday that Russia was advocating for a global move that not only includes OPEC and Russia, which had co-ordinated production cuts for four years until they fell out spectacularly this year, but also the United States. The U.S. is the world’s top producer now and the slide in crude prices is causing huge financial damage to companies in the oil patch.

Some U.S. producers have been calling for caps on domestic production, and Texas regulators have planned a meeting on the topic next week.

Expectations for the OPEC meeting were high. Trump has said that output could be cut by as much as 15 million barrels a day, or about 15 per cent of global production, though experts say that is unlikely. Last week, Putin said he supported an overall cut of about 10 million barrels a day.

A cut of 10 million barrels per day for two months would be “too little too late,” said Chris Midgley, global head of analytics at S&P Global Platts. At current production rates, storage tanks will be full of oil sometime in May, and the only way to avoid filling them up would be to sustain the cuts through the end of the year, he said.