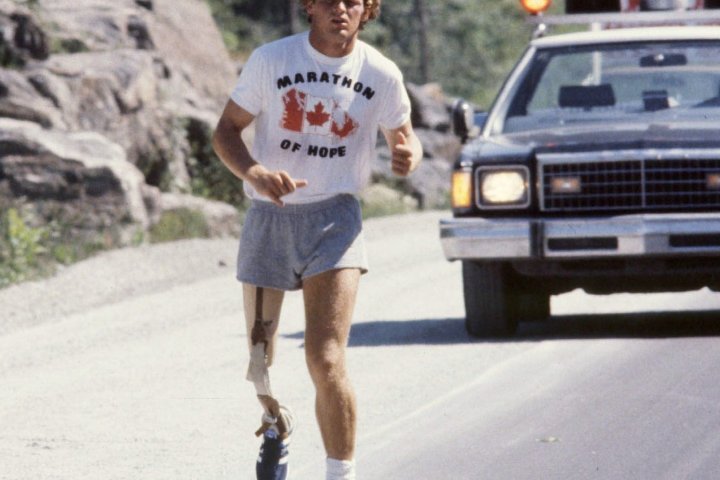 Forty years after Terry Fox began his Marathon of Hope, his brother says the message he shared is particularly poignant as Canadians deal with the COVID-19 pandemic.

The Port Coquitlam, B.C. resident lost part of his leg to cancer at the age of 18. The Marathon of Hope stemmed from his desire to raise money to fund cancer research, with a goal of running a marathon a day to raise awareness and donations.

“It’s a time to look forward, not behind,” Darrell Fox, Terry’s younger brother, said of the message Terry’s journey can share on the 40th anniversary of the start of the Marathon of Hope on Sunday.

“I think it’s timely to think ahead. Yes we’re faced with another global health challenge, but every day will be a little better than the day before. We’re looking forward.”

Despite not joining Terry on the inaugural day back in 1980 — he would join in May — Darrell says his brother’s message and acts resonate with him on the anniversary.

“Terry’s message is with me every day, that anything is possible if you try and one person can make a difference,” he said.

You should also READ  Coronavirus: The United Kingdom unites in the face of illness, death and economic collapse

Since Terry’s death, more than $750 million has been raised for cancer research through the annual Terry Fox Run, according to the research institute that bears his name.

The Terry Fox Foundation tweeted a photo of Terry and former Prime Minister Pierre Trudeau to mark the anniversary, prompting a response from Canada’s current leader.

“Thanks for sharing this photo — hard to believe it’s been 40 years. But still to this day, Terry’s courage, optimism, and determination are an example for all of us. And to those who continue to carry his message of hope forward: Thank you,” Prime Minister Justin Trudeau tweeted in response.

Closer to home, Darrell says he’s hopping on his bike and taking a page out of his brother’s book to mark the day.

Nursing home deaths linked to coronavirus in U.S. soar past 3,300 in alarming surge