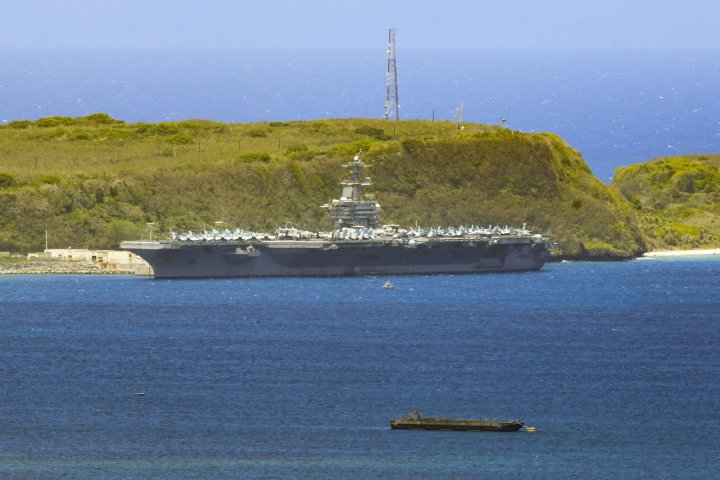 HONOLULU — People in Guam are used to a constant U.S. military presence on the strategic Pacific island, but some are nervous as hundreds of sailors from a coronavirus-stricken Navy aircraft carrier flood into hotels for quarantine. Officials insist they have enforced strict safety measures.

An outbreak aboard the USS Theodore Roosevelt began in late March and has thrust the Navy into a leadership crisis after the ship’s commander distributed a letter urging faster action to protect his sailors.

Acting Navy Secretary Thomas Modly fired Capt. Brett E. Crozier and then assailed him during a speech on the ship in Guam, saying Crozier was either “too naive or too stupid” to be in charge of an aircraft carrier. Modly resigned Tuesday after facing blowback and after publicly apologizing for his comments about Crozier.

The carrier has been docked in the U.S. territory for more than a week as the 4,865-person crew is tested for the virus and moved ashore. More than 580 sailors have been confirmed infected. One was hospitalized Thursday in intensive care, said Gen. John Hyten, vice chairman of the Joint Chiefs of Staff.

More than 1,700 sailors who have tested negative are isolating in hotels, while the sick remain on base, Navy officials said.

“Our people are getting slapped in the face,” said Hope Cristobal, who worries officials are making promises about safety they won’t keep.

She lives less than a quarter-mile from hotels in Tumon, Guam’s version of Hawaii’s popular Waikiki neighbourhood, saying, “We don’t know exactly where they’re being housed.”

Mary Rhodes, president of the Guam Hotel and Restaurant Association, declined to identify the hotels but said as many as 10 have been set aside to house up to 4,000 sailors. Seven of them had already stopped taking reservations and seen a dramatic drop in visitors as airlines cancelled flights, she said.

Guam’s hotels frequently host military members, and the U.S. Department of Defence controls about a third of the island, which is 3,800 miles (6,115 kilometres) west of Honolulu and a crucial, strategic hub for U.S. forces in the Pacific.

Each sailor is staying in a room stocked with two weeks’ worth of linens, towels and water, Rhodes said. There is no contact with hotel workers, and only military police and medical teams can visit.

The Navy has sent masks, gloves and other safety equipment to the hotels, where employees make food that military personnel deliver, Rhodes said.