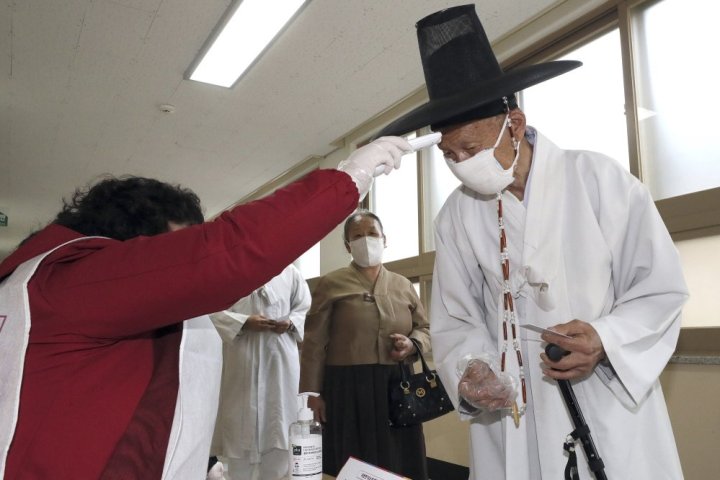 South Korea‘s parliamentary elections went ahead Wednesday under the supervision of masked poll workers armed with thermometers and sanitizing spray, highlighting that even as the coronavirus pandemic eases, health precautions will still be needed if countries move forward with plans to scale back social distancing guidelines.

When and how to reopen battered economies has been a matter of intense debate, especially in the United States, where governors have begun sketching out plans to do so in a slow and methodical process to prevent the coronavirus from rebounding. President Donald Trump has repeatedly expressed his desire to see the U.S. reopened for business quickly, though on Tuesday he appeared to back off his claim of absolute authority to determine when that happens.

In Italy, Spain and other places around Europe where infections and deaths have begun stabilizing, the process is already underway, with certain businesses and industries allowed to start back up. In South Korea, authorities resisted calls to postpone Wednesday’s vote and instead drew up a deliberate set of preventive measures to reduce risks of the virus being transmitted.

Tape or stickers marked a meter of social distancing space from nearby streets to ballot booths. Poll workers checked the temperatures of arrivals and whisked anyone with a fever or not wearing a mask to separate areas to vote, sanitizing the facilities after they did. Voters who passed the fever screening got sanitizing gel and disposable plastic gloves before entering booths to cast their ballots.

You should also READ  Study says 2 strains of new coronavirus are spreading. What does that mean?

The government also mapped out a voting process for citizens quarantined in their homes.

“I was worried about the coronavirus,” Seoul resident Chung Eun-young said. “They checked my temperature and handed me gloves, but it wasn’t as bothersome as I thought it would be.”

South Korea was the second country after China to see its virus cases surge, recording hundreds of new cases each day at the end of February and early March. While it closed schools, it didn’t institute a lockdown. Instead, it put its efforts into an aggressive test-and-quarantine program so far credited for far lower fatality rates than seen in Europe and the U.S.

The U.S. has by far been the hardest-hit country, with more than 26,000 deaths and over 609,000 confirmed infections, according to a Johns Hopkins University’s count. While the crisis is far from over, scenarios predicting a far greater number of deaths and hospitalizations have not come to pass, raising hopes from coast to coast.

California Gov. Gavin Newsom, who has joined a coalition with his counterparts in Oregon and Washington on how to emerge from the crisis, on Tuesday outlined a set of conditions for lifting restrictions in America’s most populous state. Among other things, he said hospitalizations will have to decline and more testing will have to become available.

And when the state does reopen, he warned, things will not look the same. Waiters will probably be wearing masks and gloves, schools may stagger students’ arrival times to reduce crowding, and large gatherings such as sporting events and concerts are “not in the cards,” he said.