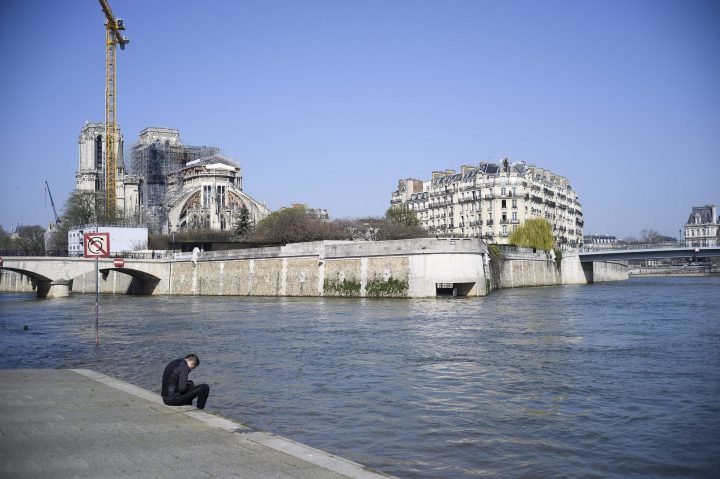 PARIS — Notre Dame Cathedral stands crippled and alone, locked in a dangerous web of warped scaffolding one year after a cataclysmic fire gutted its interior, toppled its famous spire and horrified the world.

The unstable scaffolding now endangers the Gothic jewel that for many embodies the soul of France.

The restoration of the landmark from the 12th and 13th centuries has been halted and the workers sent home because of France’s coronavirus lockdown that began March 17, thwarting plans to start removing the 250 tons of scaffolding.

So even Notre Dame has been left in isolation by the pandemic that has affected so many people across France.

The 13-tonne bell in the south tower, named Emmanuel, that traditionally rings on solemn occasions will sound at 8 p.m. Wednesday, joining the nightly rounds of applause for overstretched health workers.

On Good Friday, Paris Archbishop Michel Aupetit led an exceptional but tiny gathering inside the church, at the foot of the huge golden cross that remains intact.

“Today, we stand in this half-fallen cathedral to say that life is still here,” Aupetit said in the televised ceremony.

The gathering in the fragile church was meant to raise the spirits of a nation in distress.

“The message of hope is especially important for our compatriots at a time when we are particularly affected by the coronavirus, which is sowing anguish and death,” the archbishop told reporters.