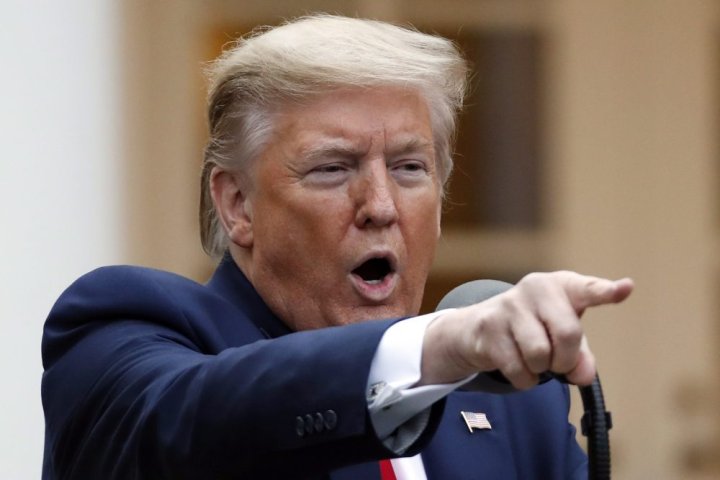 U.S. President Donald Trump appears to be banking on one thing throughout the coronavirus pandemic: that his supporters will forget everything he says immediately after he says it, and that any contradictions will be ignored.

It’s certainly been difficult to follow Trump’s many twisting narratives throughout the COVID-19 pandemic, as he’s gone from downplaying the threat, to claiming total control of the crisis, to blaming his usual list of suspects for every setback.

Those usual suspects have included the Democrats, the media, Barack Obama, China and, most recently, the World Health Organization, which he’s now trying to financially starve out for supposedly not raising the alarm early enough.

But while Trump continues to claim that he got ahead of the WHO by closing the U.S. to travellers from China over two months ago, his own words show he frequently ignored or downplayed the threat after taking that action, even as the WHO ramped up its alarm. He also can’t escape the numbers, which show that the U.S. is leading the world in deaths and infections since the crisis began.

He’s claimed that he has “total” authority over the U.S. response to the virus, while taking no responsibility “at all” for the country’s widely reported testing failures. He’s accused the media of stoking “hysteria” around the virus while also failing to report the full scope of the danger. He’s even claimed that the virus will disappear like a “miracle,” only to declare a few weeks later that he “felt it was a pandemic long before it was a pandemic.”

You should also READ  India coronavirus cases surpass half a million, with no end in sight

Here’s how Trump distorted the dangers of the virus, in his own words.

Trump received multiple warnings about the threat of the coronavirus in January. His health secretary, Alex Azar, briefed him about the threat on Jan. 18, three days before the first confirmed case in the U.S.

“We have it totally under control,” Trump told CNBC on Jan. 22. “It’s one person coming in from China, and we have it under control. It’s going to be just fine.”

Trump’s most frequent accusation against the WHO is tied to Jan. 30. That’s when the WHO declared COVID-19 a “public health emergency of international concern,” while also explicitly refusing to recommend travel restrictions to prevent it from spreading out of China.

“The Committee does not recommend any travel or trade restriction based on the current information available,” the WHO said in a statement that day.

Trump reportedly received two dire warnings from his aides around this time. Peter Navarro, Trump’s economic adviser, warned that the virus could infect 100 million Americans and kill between 1-2 million of them, according to Navarro’s Jan. 29 memo obtained by Axios. Azar also warned Trump about the virus on Jan. 30, but the president dismissed the warning as “alarmist,” the New York Times reports.