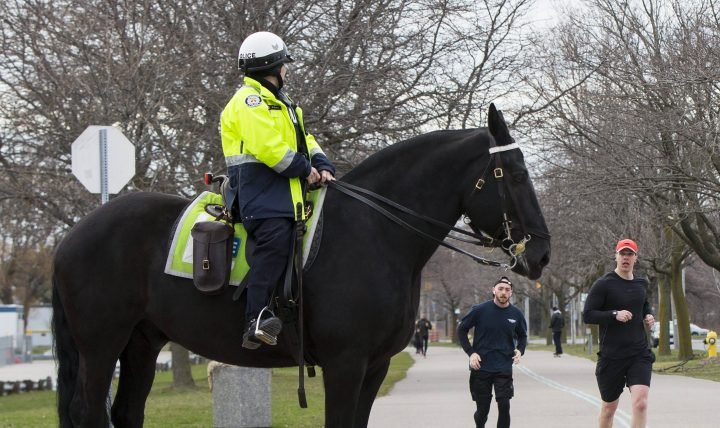 Corey Yanofsky, a data scientist living in Ottawa, took his dog out for a walk last week and ended up with an $880 fine for standing in the wrong place during the COVID-19 pandemic.

Obi Ifedi of Ottawa was walking through a park with his daughter April 4 when he was approached by a city bylaw officer. He says he was eventually tackled and ended the evening with a bruised lip and fines totalling more than $2,000.

Then there was Melissa Leblanc of the Montreal suburb of Beaconsfield, who was greeted by police at her door April 5 after family and friends wished her a happy birthday from their cars.

They are just a handful of the hundreds of Canadians feeling the impact of policies that governments have put in place since March aimed at stopping the spread of COVID-19. But experts in criminology and law are pushing back against the conventional wisdom that giving police the power to levy heavy fines will make people safer.

They argue public health directives are unclear, and the way they are being enforced is counterproductive and a distraction from the failure of the state to better prepare for COVID-19. Moreover, they say, the heavy fines disproportionately affect people of limited means, people of colour and marginalized communities.

Ifedi, a stay-at-home father originally from Nigeria, said he and his daughter left an Ottawa park after being ordered to do so. But he alleges the agent followed and continued to scold them as they walked home. Ifedi said he told the officer there weren’t any signs stating the park was closed.

“He didn’t like me talking back,” Ifedi said in an interview Tuesday. “That’s when he said: ‘You know what, I will write you a ticket. Give me your name.’ ”

Halifax-based lawyer David Fraser said police in his city have previously been called out for racial profiling. A 2019 report commissioned by the provincial human rights commission indicated black males in the Halifax area were nine times more likely to be stopped by police than the general population.

Fraser, author of the Canadian Privacy Law Blog, said there is little reason to believe profiling has stopped during the pandemic. And he said the province’s public health orders are unclear, hastily drawn up and may lead to over-policing.

For example, he said, on Sunday, Halifax Regional Police denied rumours their officers were stopping all vehicles carrying two or more people in order to check for non-essential travel. “While inspecting vehicles can at times be part of our #COVID-19 enforcement efforts if necessary, NOT ALL vehicles are being stopped,” the police said on Twitter.

Fraser said that message strongly suggests police are sometimes stopping cars, even though nothing in the public health orders gives police added authority to stop vehicles or interrogate people.