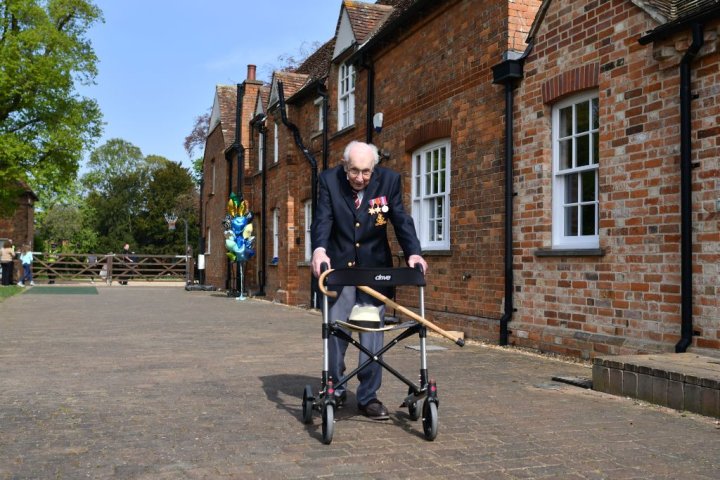 What began as a modest way for a 99-year-old to stay fit became a whopping multi-million-dollar donation during the novel coronavirus pandemic.

Captain Tom Moore, a veteran of the Second World War, broke his hip 18 months ago. In a bid to stay fit, his daughter, Hannah Ingram-Moore, offered to pay him to walk lengths of their garden at his Marston Moretaine, Bedfordshire home.

The garden loop is 25 metres long.

“I told him, I’ll give you a pound for every length that you do and if you do 100 by your 100th birthday that’ll be 100 pounds,” Ingram-Moore, who lives with her father 80 kilometres north of London, told NBC News.

Two weeks later, they raised over £19 million (CA$33 million) on his fundraising page, which was all donated to the U.K.’s National Health Service (NHS).

“I never dreamt I would be involved in such an occasion as this,” Moore told the BBC after his final lap, adding that the amount raised was “an absolute fantastic sum of money.”

As of Friday morning, his JustGiving fundraising page reached more than £19 million, 3,820 per cent higher than his original goal. The page even temporarily crashed given how many people were trying to donate, the BBC says.

“We are absolutely floored by what has been achieved but we’re so happy, so humbled and so proud,” Ingram-Moore told the publication.

You should also READ  With COVID-19 in Iran reaching Canada, expert warns outbreak will only escalate

“He’s a beacon of hope in dark times and I think we all need something like this to believe in and it’s for such an amazing cause.”

Even Prince William and Kate Middleton, who made an undisclosed donation, are fans.