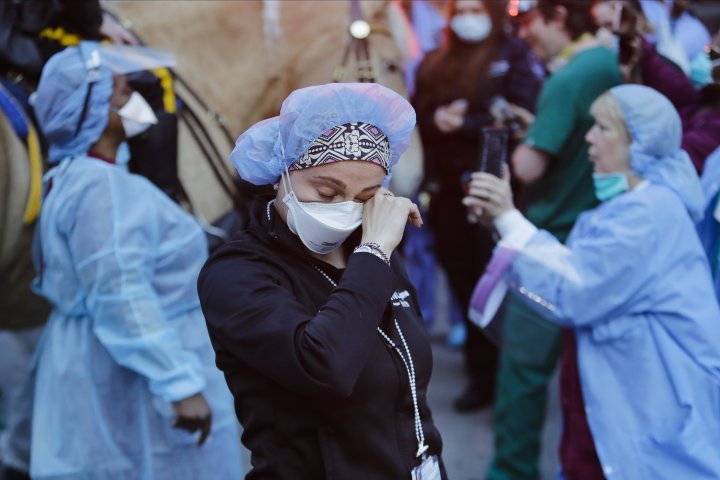 NEW YORK — Hopeful talk about getting people out of their homes and back to work in some parts of the country seems a far cry from the harsh reality in New York and its suburbs: Thousands of people infected with the coronavirus are still streaming into hospitals every day. Hundreds are still dying.

New York Gov. Andrew Cuomo noted the lack of major improvement Thursday as he announced another 606 deaths in the state and said current social isolation rules will stay in place through at least May 15. The number dying was down from a day earlier, but remains alarmingly high.

New York hospitals are still jammed with nearly 18,000 coronavirus patients, fewer than the crushing numbers authorities once feared but still at crisis levels that have barely budged for more than a week. Nearly 4,400 of those patients were on ventilators, the majority of whom, if past trends hold, are unlikely to survive.

The virus has also continued to rage through the metro area. In New Jersey, deaths have more than doubled in a week, to more than 3,500 as of Thursday. In Connecticut, fatalities rose 40 per cent in the last week to over 970 overall. Most of the deaths in both states have been in the greater New York City area.

Conditions inside hospitals have stabilized as help has poured in. At Jacobi Hospital in the Bronx, the emergency room is less crushed, but demands remain heavy in the intensive care unit, said nurse Sean Petty.

You should also READ  ‘Too many people need help’: Calgarians fundraise for Chinese coronavirus supplies

Other medical professionals warned they could be overwhelmed again if restrictions ease too soon.

“We will end up where we started, an influx of people and struggling to save them all,” said Diana Torres, a nurse at Mount Sinai West in Manhattan. “If we reopen now, we just wasted our time.”

Talk of “reopening” the country baffled people this week in Queens, where the virus has killed at least 2,800 people.

“Everybody coming back to work at once — what does that mean?” said Julio Alvia, a 27-year-old video editor. “Do we go back to gridlock and crowded sidewalks, lines and handshakes? Can that happen? I don’t think that it can.”