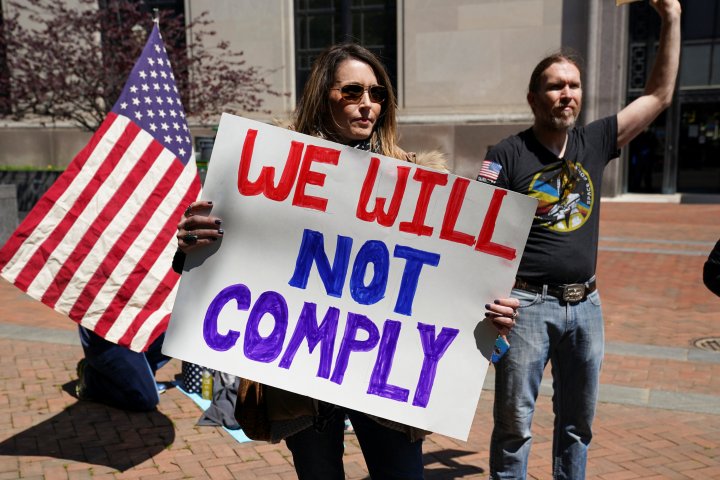 DETROIT — As sweeping stay-at-home orders in 42 U.S. states to combat the new coronavirus have shuttered businesses, disrupted lives and decimated the economy, some protesters have begun taking to the streets to urge governors to rethink the restrictions.

A few dozen protesters, many with young children, gathered in Virginia’s state capital of Richmond on Thursday in defiance of Democratic Governor Ralph Northam’s mandate, the latest in a series of demonstrations this week around the country.

The protests have taken on a partisan tone, often featuring supporters of President Donald Trump, and critiquing governors whose shelter-at-home directives are intended to slow the spread of a pandemic that has killed more than 31,000 across the United States.

On Wednesday, thousands of Michigan residents blocked traffic in Lansing, the state capital, while protesters in Kentucky disrupted Democratic Governor Andy Beshear’s afternoon news briefing on the pandemic, chanting “We want to work!”

States including Utah, North Carolina and Ohio also saw demonstrations this week, and more are planned for the coming days, including in Oregon, Idaho and Texas.

The United States has seen the highest death toll of any country in the pandemic, and public health officials have warned that a premature easing of social distancing orders could exacerbate it.

Trump has repeatedly said he wants to “reopen” the economy as soon as possible and has clashed with governors over whether he can overrule their stay-at-home orders.

In Michigan, where Democratic Governor Gretchen Whitmer has imposed some of the country’s toughest limits on travel and business, some protesters at “Operation Gridlock” wore campaign hats and waved signs supporting Trump.

Whitmer is considered a top contender to be the running mate of Democratic presidential nominee Joe Biden when he takes on Trump in November’s general election.

One of the organizers of the demonstration in Lansing, Meshawn Maddock, said she was frustrated that much of the media focused on a handful of protesters who gathered on the steps of the capitol, including militia group members and a man holding a Confederate flag who she said were not part of the rally.

She faulted Whitmer for dismissing the event as a partisan rally instead of engaging with the thousands of residents who Maddock said have legitimate questions about the governor’s stay-at-home order.