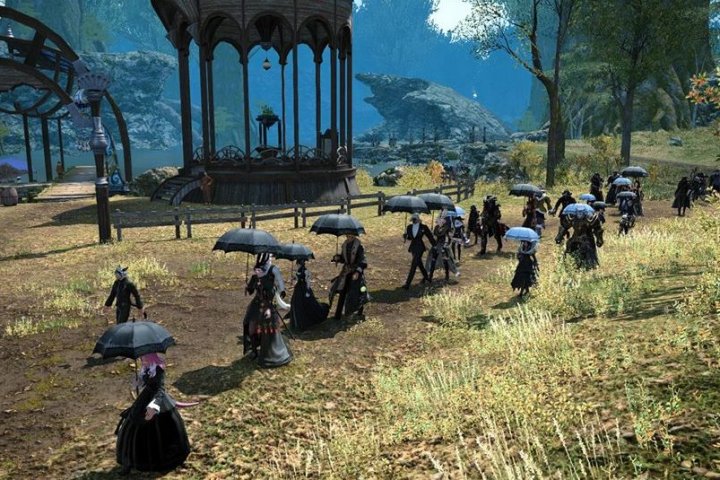 Things got very real for an online community of Final Fantasy XIV players in early April when one of their own contracted the novel coronavirus and died of complications related to the COVID-19 disease.

The tight-knit community of gamers couldn’t exactly gather in person to mourn their fallen comrade, who went by the name Ferne Le’roy on the role-playing game’s Zalera server. Many of the gamers had never met her in person, and now they were all locked down in their homes around the globe.

So they did the next best thing and honoured her where they knew her best: in their online world.

Hundreds of players logged on at the same time, equipped their digital avatars with black clothing and umbrellas, then marched in a funeral procession through the online fantasy world in a touching tribute to their friend on April 11, according to video and posts on social media.

“I didn’t expect anyone to actually show up,” one of the march’s Facebook organizers, who goes by Leafelda Moonchild online, told the tech site Inverse.

“I made the post so that those that may have known her would be informed. The fact that so many people showed up, not only from Zalera but from other servers, really took me by surprise.”

The original funeral post simply announced Ferne Le’roy’s death and asked people to show up for a tribute on a Saturday afternoon.

You should also READ  Demand for face masks on the rise amid coronavirus outbreak — but are they effective?

“One of our own was lost to COVID-19,” the post read on Facebook. “Now’s the time to show up and show out for a fallen Zalera player … Remember the fallen, or no one else will.”

The funeral lasted for nearly an hour as players marched across the online world of the game to a large, picturesque tree for Ferne Le’roy’s final send-off. The video has since been shared online from the community’s Facebook page.

One video of the procession racked up more than 106,000 positive reactions and comments on Reddit Monday, where many users marvelled at the community’s touching gesture.

“That world may be virtual but the sentiment isn’t,” one user wrote in the comments section. “What an incredible thing to do.”