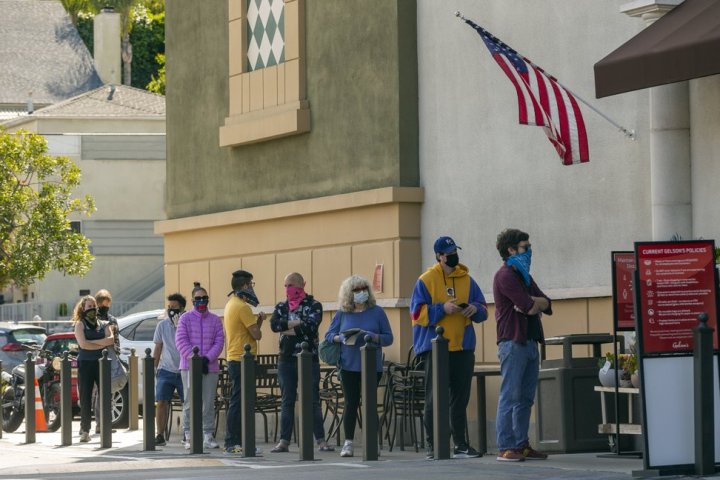 As unemployment rises and many around the world face the first rent payments after losing their jobs, governments are wrestling with when and how to ease restrictions designed to control the coronavirus pandemic.

Mandatory lockdowns to stop the spread of the new virus, which has so far infected more than 2.2 million people and for which there is no vaccine, have brought widespread hardship.

In a joint statement Saturday, a group of 13 countries including Canada, Brazil, Italy and Germany called for global co-operation to lessen the economic impact of the pandemic.

“It is vital that we work together to save lives and livelihoods,” they said.

The group, which also includes Britain, France Indonesia, Mexico, Morocco, Peru, South Korea, Singapore and Turkey, said it was committed to “work with all countries to co-ordinate on public health, travel, trade, economic and financial measures in order to minimize disruptions and recover stronger.”

The countries emphasized the need to maintain “air, land and marine transportation links” to ensure the continued flow of goods including medical equipment and aid, and the return home of travellers.

In the United States, the debate has taken on partisan tones ahead of this fall’s presidential elections. Republican President Donald Trump urged supporters to “liberate” three states led by Democratic governors, tweeting the kind of rhetoric some have used to demand an end to stay-at-home orders that have thrown millions out of work.

Most governments remain cautious, even as the economic toll rises. Public health experts warn that easing shutdowns must be accompanied by wider testing and tracing of infected people to keep the virus from coming back.

Singapore, which has been held up as a model for other nations after taking strong measures to clamp down on the virus, reported a new daily record of 942 infections Saturday that saw its total surge to 5,992.

The number of cases in the city-state has more than doubled just this week alone amid an explosion of cases among foreign workers staying in crowded dormitories, that now make up 60 per cent of Singapore’s infections.

Japan also reported a fresh surge of 556 new cases Saturday, pushing its total to over 10,000. Prime Minister Shinzo Abe expressed concern Friday that people were not observing social distancing and announced a 100,000-yen ($930) cash handout to each resident as an incentive to stay home.