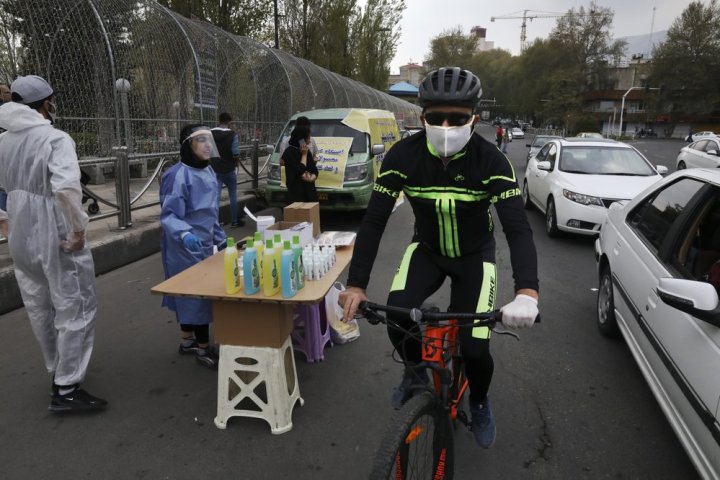 Iran on Monday began opening intercity highways and major shopping centres to stimulate its sanctions-choked economy, gambling that it has brought under control its coronavirus outbreak — one of the worst in the world — even as some fear it could lead to a second wave of infections.

Stores from high-end malls to the meandering alleyways of Tehran‘s historic Grand Bazaar opened doors, though the government limited their working hours until 6 p.m. Restaurants, gyms and other locations remain closed.

There are still lingering questions over Iran’s outbreak and the safety of those returning to work. Taxi drivers partitioned their seats from the customers with plastic shields and wore masks, having seen colleagues sickened and killed by the virus and the COVID-19 illness it causes.

Iranian state TV quoted the health ministry’s spokesman, Kinoush Jahanpour, as saying Monday that another 91 people died if the virus, bringing he country’s death toll to 5,209 amid over 83,500 confirmed cases.

“We, the taxi drivers, are at the highest risk than anybody else because we are constantly in touch with people,” cab driver Nemat Hassanzadeh said. “We have no choice but to work because we cannot afford to sleep at home and not to work with these high prices. … I am a tenant and need the money to pay the monthly rent and also pay off my car loan.”

Iran is the region’s epicenter of the pandemic, though even Iran’s parliament suggests the death toll is nearly double that and overall cases remain vastly underreported.

Iran downplayed the crisis for weeks, even as top officials found themselves sick with the virus. The country’s civilian government, led by President Hassan Rouhani, has declined to implement the 24-hour lockdowns seen in other Mideast nations.

Authorities have defended their response by outpointing the harsh economic impact such a lockdown would have. Iran already struggles under severe U.S. sanctions blocking the sale of its crude oil abroad, measures imposed after President Donald Trump unilaterally withdrew America from Tehran’s nuclear deal with world powers in 2018. That has led to a monthslong period of increasing tensions between the nations — tensions that have persisted through the pandemic.

The state-owned polling centre ISPA found the virus has hurt the income of 50 per cent of those surveyed, with 42 per cent saying their businesses closed as a result. Of those polled this month, 13.5 per cent said the outbreak left them jobless. The survey interviewed 1,563 people and offered no margin of error.

Iran’s economy suffered from over 20 per cent unemployment among its youth and over 40 per cent inflation even before the outbreak.

“I only pick passengers with masks. I cannot put my health at risk,” said Ali Qomi, who uses his personal car as a gypsy cab, like many other unemployed Iranians. “We poor people have no way except working to afford the increasing prices of our daily needs.”