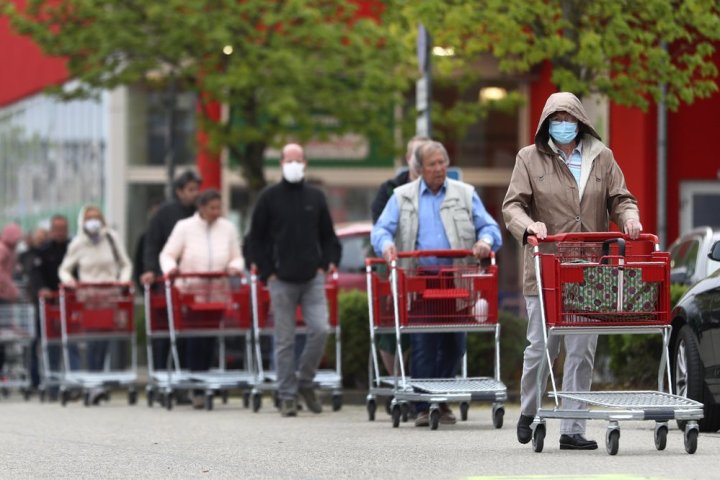 The coronavirus is touching all levels of society and increasing tensions as governments start to ease restrictions that health experts warn should be done gradually to avoid a resurgence of the illness that has killed more than 165,000 people.

The mounting pressure was evident in the United States. The Trump administration says parts of the nation are ready to begin a gradual return to normalcy. Yet some state leaders say woefully inadequate federal action, like a lack of testing supplies, is hindering their response to the illness.

READ MORE: Coronavirus — House of Commons set to re-open after parties fail to strike a deal

After insisting the country’s virus testing system was without fault, U.S. President Donald Trump said Sunday evening he would be using the Defence Production Act to compel increased manufacturing of testing swabs. He also remained defensive, however, vowing that there were enough swabs to go around. “Swabs are easy,” the president said, bringing one to his news briefing and waving it in front of reporters.

Trump also defended protests by his supporters, who have been gathered to demand state governors lift controls on public activity that were meant to stop the spread of the virus. The president has invoked their rallying cry and said Sunday night, “these people love our country. They want to go back to work.”

You should also READ  Coronavirus: Death toll climbs to 354 in Iran as officials work to contain outbreak

Shutdowns have disrupted economic, social, cultural and religious life and plunged the world into an economic slump unseen since the Great Depression in the 1930s.

The International Monetary Fund expects the global economy to contract 3 per cent this year. Tens of millions of workers have lost their jobs and millions more fear they’ll be next.

A few countries are acting to ease restrictions and resume economic activity, but most of the world agrees the steps must be gradual.

China, where the pandemic began, has lifted travel and other restrictions, but customer traffic has been slow to return. And masks and temperature checks are routine.

India eased the world’s largest lockdown to allow some manufacturing and agricultural activity to resume _ if employers can meet social distancing and hygiene standards. Companies are required to transport and shelter their workers, which few of them are able to do. India also recorded its biggest single-day spike in cases, adding more than 1,500 as it works to increase testing, stock up equipment and prepare hospital beds for more patients.

Germany intends to begin allowing some small stores, like those selling furniture and baby goods, to reopen. Albania plans to let its mining and oil industries reopen, along with hundreds of businesses. New Zealand extended its lockdown another week, but workers at some businesses such as construction and manufacturing will be able to resume their jobs soon.