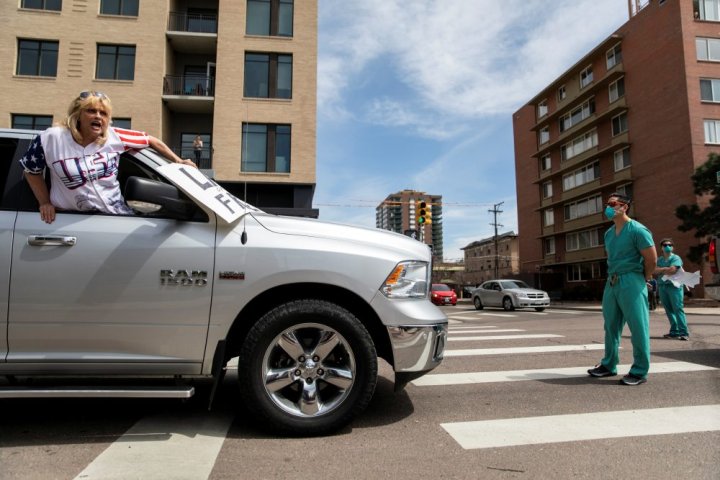 That dynamic was on full display in Denver, Colo., over the weekend, where the United States got its own bizarre Tiananmen Square-like photo moment — except instead of a protester standing up to a government tank, it was two health-care workers standing up to a “Land of the free”-loving couple in a truck.

Video and photos circulating online show two people in scrubs and masks blocking a crosswalk to stop a procession of far-right protesters en route to the state’s Capitol, where many of their ilk were already violating physical distancing rules to call for an end to the coronavirus lockdowns meant to slow the spread of the virus.

The two counter-protesters — a man and a woman — could be seen standing in the path of a large silver pickup truck on Sunday, refusing to budge while the vehicle’s occupants hurled a flurry of verbal abuse at them. A witness described them as “nurses” in his video, although their exact professions are unknown. They told another witness they were health-care workers.

“Go to China!” a middle-aged blonde woman in a U.S.A. shirt shouted at them from the pickup truck, while leaning out of the passenger’s window. “It’s a free country! America the free!” she declared, before slapping a sign reading “Land of the free” onto the windshield.

The two health-care workers did not move.

Videos and photos of the incident have circulated widely on the internet, where many have called it a perfect encapsulation of the anxiety and frustration emerging around the COVID-19 pandemic. The illness has killed more than 40,000 people in the United States alone, while lockdowns meant to slow its spread have tipped the world into a major recession. Many have become impatient with the lockdowns, although grouping up to protest those lockdowns appears to be a largely right-wing phenomenon at this point.

More than 12 million people have watched the Denver video on Twitter alone, where the angry woman has been dubbed “Karen” — an internet slang term for an irritating woman who demands to speak to the manager when she doesn’t get her way.

“The most un-American thing you can do is tell medical professionals who’re saving American lives to go to China,” Twitter user Michelle Sylvester wrote. “Bye Karen.”