Coronavirus: Dozens of companies on wait-list to distribute test kits in Canada amid shortage 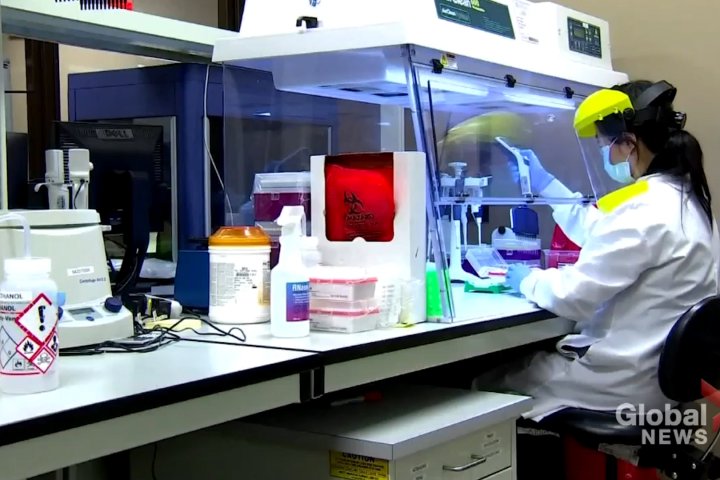 Every province and territory across Canada is asking for more COVID-19 test kits, but Health Canada has only approved 13 companies so far to import and distribute them — with dozens more on a wait-list, eager to be green-lit.

Health Canada lists a backlog of more than 50 companies waiting for the green light to disseminate their test kits across the country, some of which have been waiting for more than a month.

Other countries, like those in the United Kingdom, have approved the sale of particular brands of test kits within a few days.

“If we get approval, it’s fantastic. If we don’t, then it’s a bit of a challenge from that perspective,” said Jeff Stevens, CEO of Datametrex AI, which has an agreement with a South Korean manufacturer to sell its tests to Canada and other countries around the globe, including the United States.

He said his company has been on the wait-list for about two weeks, even though his product aligns with what Health Canada has already approved in the form of a nucleic acid detection kit.

“These are the type of test kits that Health Canada has prioritized as being their preferred kit because of the nature of the testing at 20-minute turnaround,” he said, “which is key because that will allow you to keep people out of the health care infrastructure.”

Stevens adds that his company isn’t even included on the list since it was last updated in March.

He said there could be many more companies like his that aren’t shown on the list but are waiting for approval.

“I know they have not updated their website since the end of March because they have so much happening, so 52 are showing but there might be 152 by now,” he said.

In a statement to Global News, Health Canada would not say specifically why there are dozens of countries caught up in the approval process, but said it had an interim order in place “to help ensure quicker and more flexible approval of the importation and sale of medical devices that are necessary for Canada’s response to COVID-19, including test kits.