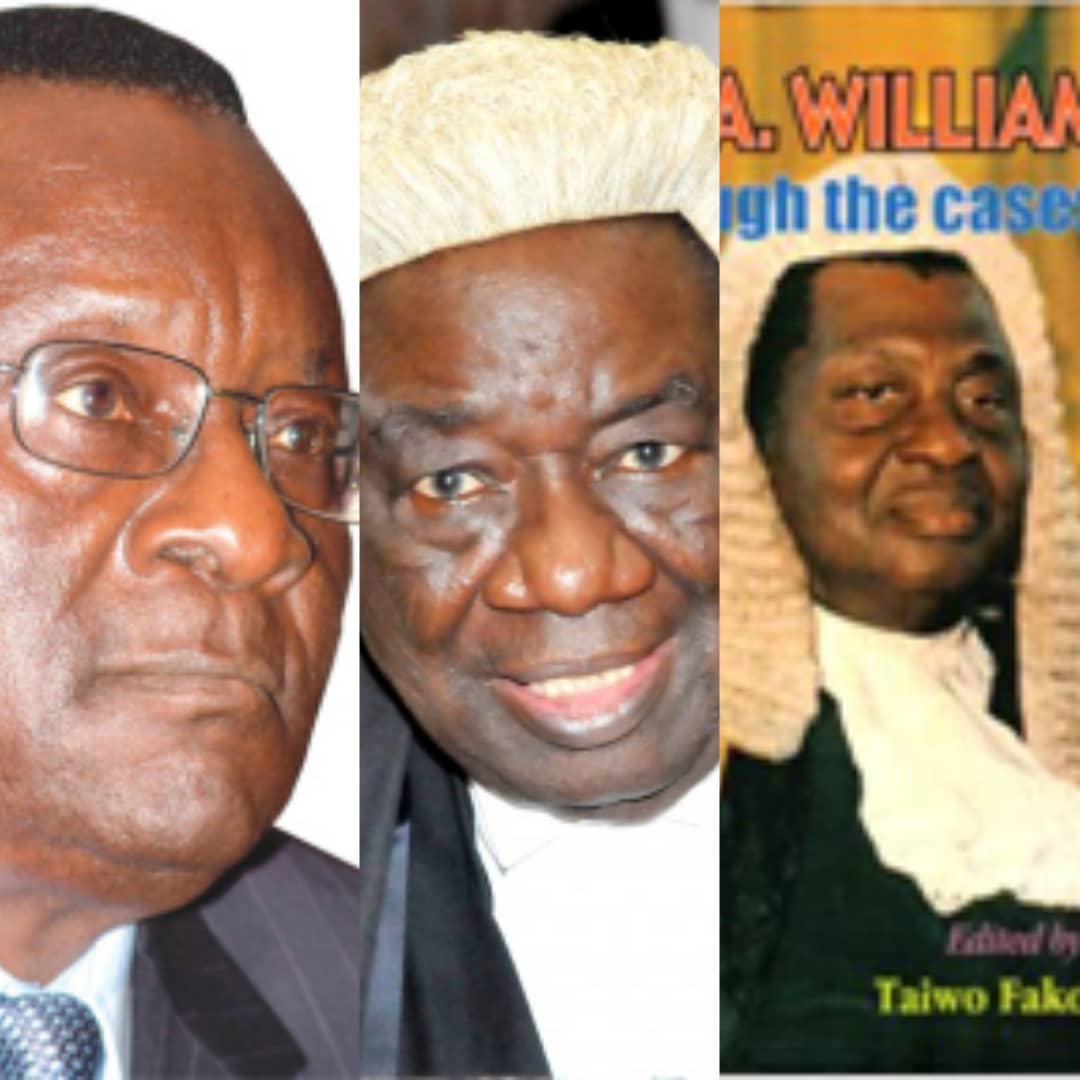 The gadfly, Gani Fawehinmi SAM, SAM didn’t have it rosy in his legal practice in the 80s due to professional animosity between him some other senior lawyers like Richard Akinjide, SAN, FRA WILLIAMS, SAN and Keyinde SOFOLA, SAN.

This led to his being denied the prestigious rank of Senior Advocate of Nigeria, SAN by the Legal Practitioners Privileges Committee, for many years.

At a time, when Akinjide was the Attorney-General of the Federation, they saw an opportunity to deal with Gani, which could have led to him being disrobed from practice.

Gani had then often accused Williams of “hording” Supreme Court judgments which he used as an advantage over other lawyers in court.

Gani decided to break the monopoly by starting the publication of his NIGERIAN CONSTITUTIONAL LAW REPORTS IN 1981, the precursor to the popular NIgerian Weekly Law Reports (NWLR).

However, Akinjide caused him to be queried for allegedly advertising himself in the book, against the professional ethics of legal practitioners.

Gani knew he was up for a titanic battle as his legal career was about to blow off in his face. He approached the court and fought up to the Supreme Court where he got victory. – See Legal practitioners disciplinary committee v. Gani Fawehinmi (1985) NWLR pt 7 at 300.

The battle line was already drawn between him and the top senior advocates, particularly Chief Williams.

An occasion that aptly demonstrated this belligerent spirit towards each other presented itself at the Supreme Court about several years ago when Fawehinmi and other lawyers were seated, waiting for the justices to enter the courtroom.

Chief Williams left the Bar (where lawyers normally sit in court) and entered one of the exit ways that led to the courts chambers.
On his way back, the hulking titan tripped and his whole six foot- plus frame crashed on the floor with a heay thud.

Spontaneously, lawyers, among whom were two Senior Advocates, rushed to his rescue. But Gani just cast a fugitive glance at them and continued reading as if nothing had happened.

Each time both of them appeared against each other in court and Williams cited foreign authorities, Fawehinmi would deride him by urging that Chief Williams “stop the circuitous voyage round the globe”, “why go to India” he would ask, “when there are enough cases in the Supreme Court that can be used?”

Indeed, it was usually a dramatic session on each hearing date during the 1984 case of Chief Fawehinmi against the Nigerian Bar Association over the boycott of tribunals. During one of the such sittings, as Chief Williams was talking, Fawehinmi sprung up to talk but Chief Williams shouted at the junior Fawehinmi, to “sit down” “I say sit down, i’m still on my feet”, instructed Williams. But when Faewhinmi starts talking in his often pyrotechinal finesse, Chief Williams would chip in to the judges: “we know he’s not talking to your lordship. He’s talking in his friends (pointing to the press gallery)”.

In 1983, when The Guardian newspaper came on stream, it adopted a novel policy whereby everyone, no matter their prefix, would be addressed as simply “Mr” in a society that has so much debased titles like “Dr”, .”Chief”. Iwas a hard knock for many egocentric people to take.

But The Guardian stuck to its new policy.
However, in 1984, The Guardian and two of its reporters, Nduka Irabor and Tunde Thompson were charged before the public officers (protection against false accusation) Decree No 4 of 1984 Tribunal for alleged false news.
The Guardian management decided to hire chief F.R.A. Williams as its counsel.
I happened to be the reporter that covered the trial. However, I noticed that each time I made reference to Chief Williams in my report as Mr. Williams, the next day, I noticed that the “Mr” had been changed to “Chief” contrary to the house rules.

I sought for explanation from my superiors, but was told to mind my business.
Consequently, I started using the prefix “Chief” for Williams in my subsequent reports. It was obvious that there had been a momentary shift in the “simply Mr” policy.

It was therefore not a surprise when Newswatch magazine, sometime in 1985 wrote a story titled “The death of simply Mr”. The Newswatch story alluded that Chief Williams may have given The Guardian a condition that he be properly addressed as “Chief” before accepting the brief.
Chief Williams therefore sued Newswatch for libel, claiming that Newswatch imputed that he attached conditions other than professional before accepting the brief.

As soon as Dele Giwa, the late Editor-in-Chief of Newswatch received Williams letter, he immediately contacted Gani, the Newswatch counsel.
The moment Gani received the letter, he screamed in elation, dancing in his chambers. He immediately summoned his lawyers to his office to break the “good news” to them. According to him, “this is one of my happiest moments”.

Why should Gani be elated that his client had been sued for libel? He told his bewildered lawyers that he had been waiting for that moment to confront Williams that “he had no reputation to protect”, hence, he could not sue for defamation.

Pronto, Gani fired a letter to Williams on behalf of Newswatch, pleading justification, and daring him to take newswatch to court. Williams took up the challenge and sued Newswatch for Defamation.

In a preliminary point of defence, Gani told Williams that he had no reputation to protect. And to buttress this point, Gani went to dig into the archives and excavated some things that were unpalatable to Williams.

It was a criminal case involving Williams in 1949 when he was barely six years at the bar, where he was accused of stealing his clients money.

In the case No. M3550 decided on June 6, 1949, by Justice Charles Abbot, Chief Williams was accused of stealing his clients money. He was alleged to have stolen 2,700 pounds being the money entrusted to him by one of his clients.

“In November 1948, a man named Momodu Balogun decided to negotiate for the purchase of a certain house situated at 55, Great Bridge Street, Lagos. The registered owner of this property was a man called Baba Egbe, and Baba Egbe struck a deal and Balogun agreed to purchase the house for 2,700 pounds and at the request of Baba Egbe, Balogun agreed to pay the money to Chief Williams who was at the time was Baba Egbes lawyer. When Balogun agreed to purchase the house, he did not know that it was a mortgaged property. Balogun then contracted the services of G.B.A. Coker, a lawyer who in turn wrote Chief Williams to stay action until further notice.

“On November 16, Balogun went to the office of accused 1(Chief Williams) for the purpose of paying for the property. He instructed accused 1 to perform certain professional service for him in connection with the purchase of the property. And accused 1 accepted to perform those service and Balogun gave accused 1 a cheque for 2,800 pounds to cover both purchase price and the fee, which accused 1, had consented to charge for his professional services.

“According to Balogun, he told accused 1 that he would pay the money through Mr. Coker and also, according to Balogun, accused 1 favourably compared his professional skill and experience with those of Mr. Coker and invited Balogun to abandon Mr. Coker and put the whole matter including the money despite several request.
“Balogun then instituted civil proceedings against Baba Egbe, claimimg his money back and he joined Chief Williamss a co-defendant.
” On March 13, 1949 accused 1 paid 1,300 pounds into court in the civil proceedings, denying liability upon the order of the court which he asked to be made”.

You should also READ  President Buhari expresses concern over Libya

The court said that Chief Williams`s contention was that he regarded the 2,700 pounds as property of Baba Egbe and so could not return it to Balogun. But the court was not impressed about how Chief Williams handled the transaction, which led the judge to pass strictures on him.

Said the judge: “The Bank statement (Exhibit 43) showing the operations of the `clients account` discloses that he used money from that account for the purposes of paying debts; he admitted to no less than forty of such instances. That of itself is a disreputable thing to do, though as the law now stands, not of itself a criminal one.
“I will not express any opinion as to whether or not the business methods of accused 1 amount to professional misconduct but it is my intention to impound the Bank Statements (Exhibit 43 and 45) and forward them, together with a copy of the relevant extracts from the evidence of accused 1 to His Honour, the Chief Justice.
“Balogun paid him 100 pounds for professional fees which he never performed and made no offer to return. I will not say more than that the conduct of accused 1 in this regard savours of rapacity wholly unbecoming of a member of the profession to which he belongs”.

Justice Abbot however acquitted Chief Williams.
As a mark of escaping the Judicial hammer, his second child that was born after the case was named Kayode Abisogun, apparently in response to his victory.
An overly elated Mrs Ibitola Williams, in retrospect on the case, said in a Sunday Punch interview of March 18, 1973, that the acquittal of her husband was one of her happiest moments because “his whole career depended on it”.

After the death of Giwa, Gani withdrew as counsel to Newswatch and the case was subsequently settled out of court.