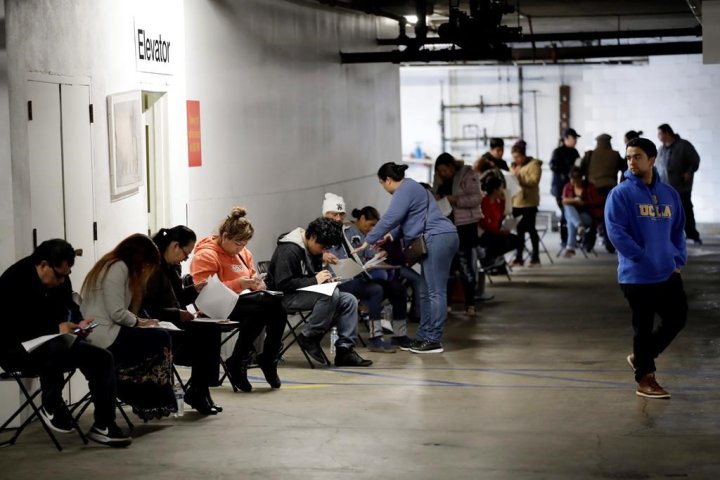 A record 26 million Americans sought unemployment benefits over the last five weeks, confirming that all the jobs created during the longest employment boom in U.S. history were wiped out in about a month as the novel coronavirus savages the economy.

READ MORE: What do negative oil prices mean for Alberta and Canada’s economy?

The Labor Department said on Thursday 4.427 million more people applied for unemployment benefits for the first time last week, down from a revised 5.237 million the week before. The median expectation among economists in a Reuters poll was for claims to have fallen to 4.2 million last week, although estimates had ranged as high as 5.5 million.

The latest data brings the cumulative unemployment benefits claims to more than 26 million since the week ending March 21, representing about 16% of the labor force. The economy created 22 million jobs during the employment boom which started in September 2010 and abruptly ended in February this year.

Though weekly jobless filings remain very high, last week’s data marked the third straight weekly decline, raising hopes that the worst may be over. Weekly claims appeared to have peaked at a record 6.867 million in the week ended March 28.

Nonetheless, the report adds to a growing pile of increasingly bleak economic data. It also comes amid rising protests against nationwide lockdowns to control the spread of COVID-19, the potentially lethal respiratory illness caused by the virus.

President Donald Trump, who is seeking a second term in the White House in November’s general election, has been anxious to restart the paralyzed economy. Trump on Wednesday applauded steps taken by a handful of Republican-led states to begin reopening their economies, despite warnings from health experts of a potential new surge in infections.

“The U.S. economy is hemorrhaging jobs at a pace and scale never before recorded,” said Scott Anderson, chief economist at Bank of the West in San Francisco. “It compares to a natural disaster on a national scale.”

READ MORE: Saskatchewan to ‘cautiously’ reopen from the coronavirus pandemic in 5 phases

Last week’s claims report covered the period during which the government surveyed business establishments for the nonfarm payrolls component of April’s employment report. Economists are forecasting as many as 25 million jobs were lost in April after the economy purged 701,000 positions in March, which was the largest decline in 11 years.