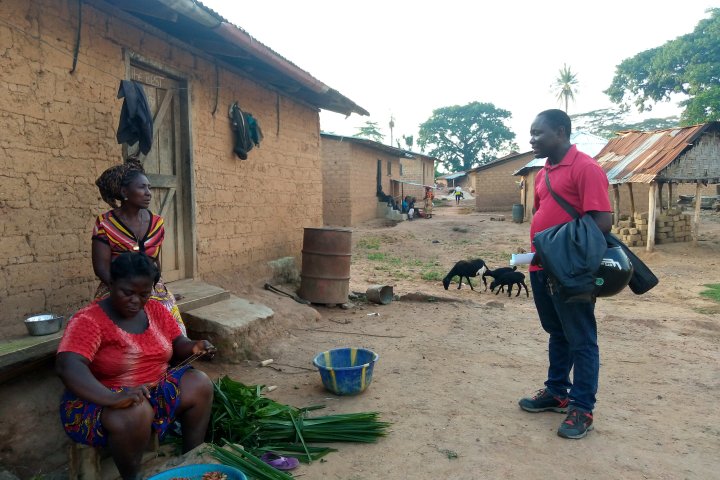 Global News is a media partner with Journalists for Human Rights and, as part of that partnership, is proud to provide a platform for updates on JHR programs.

When I first started to cover the Ebola outbreak in 2014, it was like travelling without knowing where and why I was travelling.

It all started in May 2014, when the first Ebola patient died right in the street, not far from where I work.

At that time, many people did not believe there existed anything called Ebola. Many thought it was a plan by western counties in collaboration with their leaders to kill them all.

They did not trust their leaders, whom they accused of being too corrupt, thinking they were only trying to source money from international donors to enrich themselves. At one point, they believed that their water sources had been poisoned with chemicals as a trial for health purposes.

As I was the only journalist at the time in a county with a population of over 400,000, I knew I had to do something to inform the world about what was going on in this part of Liberia. I had to provide information that could save the lives of people who could barely read or write and who depended on farming as a major source of income. The only trusted people were their educated children or relatives, who often explain the news to them. I happened to be one of their educated children or relatives.

From my past experience covering the Ebola outbreak, I realized that journalists are as important in these crises as health workers. We do not treat sick people or prescribe drugs for patients. Our role in giving timely, accurate, balanced information can save lives, reduce suffering and enhance the transparency and accountability of aid efforts. Bad information or information that comes too late can lead to the loss of precious lives and increase suffering.

Some of the greatest challenges during the Ebola crisis were to convince the locals to accept that there was a deadly killer called Ebola and to convince them to stop their traditional ways of burial, instead allowing health workers to do the burial.

This seemed impossible at first. Locals chased after anyone telling them about Ebola and even threatened to kill them. The flood of fake news and the mistrust caused by years of civil war further contributed to this difficult task. One tribal group, the Mandigoes, at one point accused another, the Lormas, of poisoning wells in their communities. That was terrible. As a journalist belonging to the Lorma tribe, it took me time and bravery to be able to report from the Mandingo communities that were the epicentre of the outbreak at the time.

But trust was one thing that got me through. As a journalist, you need to be trusted by your audience. You must be truthful to them and must be willing to listen to the other side of the divide.