Front row for history: Doc reveals fates of the ‘9/11 Kids’ at school with George W. Bush 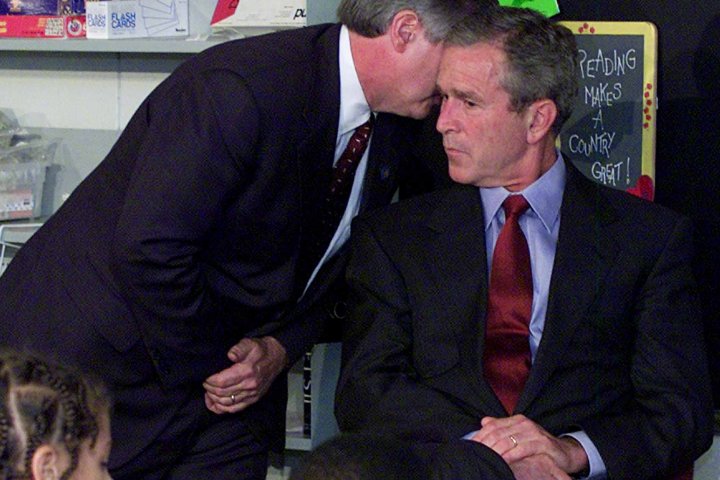 You might even remember them if you’re old enough: the group of schoolchildren who sat in front of then-U.S. president George W. Bush as he was told that two commercial airliners had flown purposefully into the World Trade Center towers in New York City.

Whatever happened to those kids? They’d started the day on Sept. 11, 2001, with the hope that they’d become famous. After all, President Bush was coming to their school and they’d be nationally televised. They didn’t realize they’d become immortalized for entirely different reasons.

In the documentary 9/11 Kids, Canadian director Elizabeth St. Phillip revisits these now 20-somethings to uncover how the tragedy shaped their lives and direction. The movie tells the story of a deeply historical event through the lens of the kids, who detail their personal stories of struggle that bring to life issues of inequality, discrimination and economic struggle in American life over the last 20 years.

Global News spoke with St. Phillip and Saloon Media’s Steve Gamester, a Canadian producer of the film, about what inspired 9/11 Kids, their stories and how the post-9/11 atmosphere echoes our current coronavirus situation.

Global News: What was the inspiration behind this doc?
Steve Gamester: I was 26 years old when 9/11 happened and the ripple effects of that day have always fascinated me. The images of President Bush with those kids stuck with me over the years. There’s something about the juxtaposition of their innocence with the gravity of the moment that makes the pictures captivating. I’m convinced people will be looking at that film footage 100 years from now.

You should also READ  U.S. not moving ahead with plan to send soldiers to Canadian border: Trudeau

But most of the conversation about that moment has always been focused on Bush. I always wondered about those kids. They represent a forgotten story of 9/11. That day was supposed to be about education and 16 Second Grade students in Sarasota, Florida, not 19 hijackers from the other side of the world. The motivation and inspiration was to turn the camera around, point it at the kids, and give them a voice. I wondered what they could tell us about post-9/11 America.

Which of the children’s stories stuck with you the most?
Elizabeth St. Phillip: I connected with all the subjects in the documentary but there was one person in particular who made a huge impact on me. His name is Tyler Radkey. He was a great athlete, a gifted student and a bit of a “bad boy.” He got in trouble with the law and ended up in prison for a few years, but by the time we met him he had a job and was turning his life around. In the documentary, you see how an encounter with a police officer up ends his whole world. It was devastating for him and his family. All the students were compelling in their own way but his story haunts me the most. So much lost potential.

How do you think 9/11 compares to the current atmosphere with coronavirus?
ESP: There are some similarities. During 9/11 many of us felt a deep fear and uncertainty. COVID-19 is the same. The global pandemic has upended every aspect of our lives — the way we live, work, travel, communicate and interact with others. Then as now, we live with a staggering amount of uncertainty and dread. And it isn’t over. The loss of life is already far greater than 9/11. I believe that when history books are written, I think COVID-19 will eclipse 9/11 in scope and impact.

Do you think coronavirus will impact this generation of children in the same way 9/11 did?
SG: I think it’s probably too early to say. We know some of the impacts of 9/11: wars in Afghanistan and Iraq, massive investments in security and intelligence infrastructure, etc. Several of the 9/11 kids talked about how that day represented a loss of innocence for them, a realization the world was a dangerous place. Perhaps the current crisis is having the same impact on children today, but there are important differences.

The extreme violence of 9/11 was on display for everyone to see, including children, and it disproportionately impacted people in the United States, Afghanistan, Iraq and now Syria. The COVID crisis is much more global in scope and the pictures are very different. The people fighting this battle are doctors and scientists, not soldiers, and I think if you are a child watching this on TV, that’s a huge difference.