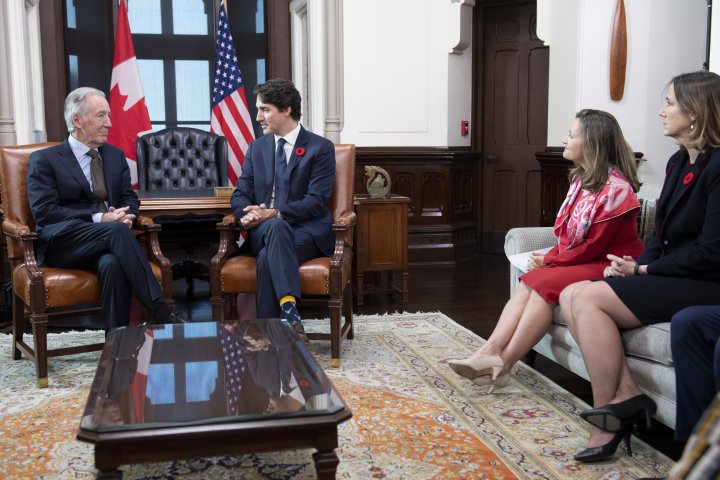 WASHINGTON — The mutual understanding, diplomatic ties and personal relationships that were forged in the fires of the North American trade talks of 2018 have been essential to the success of a shared bilateral effort to manage the COVID-19 crisis, says Canada’s ambassador to the U.S.

Kirsten Hillman, who was at the centre of the negotiations that ultimately produced the U.S.-Mexico-Canada Agreement, said the resulting bond between the two countries helped foster a quick and orderly mutual ban on non-essential travel over the shared border.

In turn, that unprecedented agreement — which took effect a month ago at the height of a fraught and frantic international effort to slam the door on the novel coronavirus — has been setting the tone ever since for ongoing talks to keep supply chains intact, facilitate imports of protective medical gear and ease the cross-border commutes of vital medical personnel.

“I believe wholeheartedly that the relationships that we built over the last couple of years in negotiating the NAFTA — and not just with trade officials, but with the entire U.S. administration and representatives across this country, so the personal relationships and lines of communication that have been developed by me and by others — have been essential in this moment,” Hillman said in an interview.

“The very much raised awareness on both sides of the border as to the degree to which the Canada-U.S. partnership is essential for our economic security, economic well-being but also, frankly, energy security, and now supply chains and health products, probably was important groundwork to allow us to move pretty quickly into a very collaborative tone with the U.S.”

You should also READ  Canada, U.S. differ on coronavirus reopening plans in face of historic unemployment

Formerly Canada’s deputy envoy in Washington under predecessor David MacNaughton, Hillman had been serving as acting ambassador since last summer before her battlefield promotion finally came through last month.

The border deal, which keeps trade and commerce flowing while shutting down non-essential travel, wasn’t even the hardest part of the pandemic response, she suggested. That came in the days prior, during the enormous logistical challenge of getting citizens home from around the world as international travel was grinding to a halt.

Since then, the two countries have been in close collaboration on a variety of related issues, including ongoing shared technical and medical research, as well as the challenge of keeping supply chains intact. But there have been pressure points and disagreements, too.

Canada and Mexico were eventually exempted, and the latest version of the Federal Emergency Management Agency’s rules for redirecting personal protective equipment (PPE), which took effect earlier this week, contains remarkably multilateral language that wasn’t in the original order.

“Negative impacts to workers, including a lack of PPE, in these and other critical sectors in Canada and Mexico may cause significant interruptions to the corresponding supply chains in the United States, and in turn, may disrupt the large flow of cross-border trade with our neighbours,” the document reads.