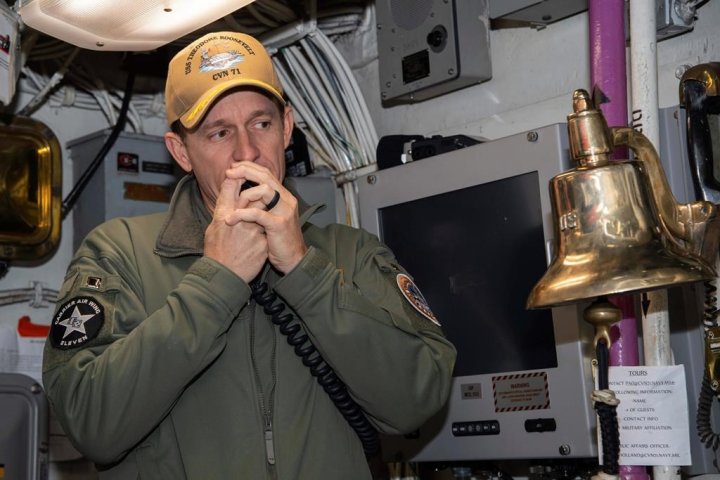 In an extraordinary reversal, the U.S. Navy has recommended reinstating the fired captain of the coronavirus-hit aircraft carrier Theodore Roosevelt, whose crew hailed him as their hero for risking his job to safeguard their lives, officials said on Friday.

The Navy’s leadership made the recommendation to reinstate Captain Brett Crozier to Defense Secretary Mark Esper on Friday, just three weeks after Crozier was relieved of command after the leak of a letter he wrote calling on the Navy for stronger measures to protect the crew, the officials said, speaking on condition of anonymity.

The Pentagon issued a statement acknowledging Esper received the results of the Navy’s preliminary inquiry into the Roosevelt incident. But it added that Esper wanted to review a written copy of the completed inquiry.

Suggesting no decision was imminent, the statement said Esper then “intends to thoroughly review the report and will meet again with Navy leadership to discuss next steps.” The Navy said in a statement “no final decisions have been made.”

“During this time of crisis, Captain Crozier is exactly what our Sailors need: a leader who inspires confidence,” he said.

A senior U.S. defense official, speaking on condition of anonymity, said Esper wanted to be sure that the final Navy report would stand up to public scrutiny before signing off and stressed that the Roosevelt outbreak inquiry went far beyond Crozier.

But Esper’s deliberations raised questions about whether political or other considerations might override the Navy’s recommendations in a case that has seen Democrats vocally critical of the Trump administration’s handling of the matter.

Sources say Crozier is one of the 856 sailors from the Roosevelt’s 4,800-member crew who have tested positive for the coronavirus, effectively taking one of the Navy’s most powerful ships out of operation.

Crozier was fired by the Navy’s top civilian, then-acting Navy Secretary Thomas Modly, against the recommendations of uniformed leaders, who suggested he wait for an investigation into the letter’s leak.