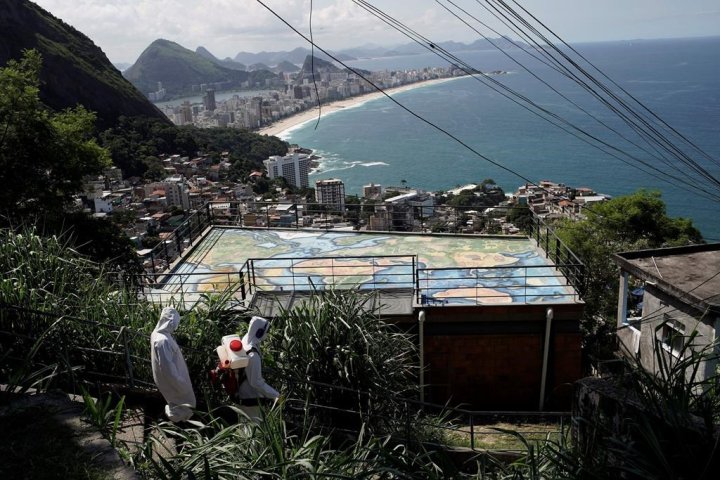 Brazil’s government is working on a plan to gradually reopen economic activity that has been shuttered in efforts to contain the spread of the coronavirus, and hopes professional soccer matches can resume shortly without spectators, an Economy Ministry senior official said on Monday.

Speaking at a news conference in Brasilia, productivity and competition secretary Carlos da Costa said there is still no date for the resumption of business activity or soccer games, and stressed that health and safety will be the main priority in all decisions.

Da Costa said soccer was one example of a sector in the economy that could reopen relatively quickly, and that the government is in talks with clubs and the Brazilian Football Confederation (CBF) about the timing.

Bars and restaurants were another sector that could be reopened soon, he said.

The CBF, which suspended all soccer matches on March 15, did not respond to requests for comment, but local media dismissed da Costa’s proposals and said football’s governing body had told clubs not to expect any imminent return.

Da Costa and Deputy Economy Minister Marcelo Guaranys said the Economy Ministry is not trying to decide when commerce resumes and that it is taking its cue from the Health Ministry, but noted that planning for that is well under way.

Brazil has recorded more than 66,000 confirmed coronavirus cases and more than 4,500 deaths related to the illness. The economic damage from the outbreak and lockdown is expected to be severe, with some analysts saying the economy will have its biggest annual crash on record.

Some scientists said over 1 million in Brazil are probably infected. The country is heading into winter, which can worsen respiratory illnesses.

Brazil has one of the lowest per-capita coronavirus testing records in Latin America, but da Costa said the government is working toward providing 7 million to 8 million tests per month, possibly even more.

Da Costa said the government will soon announce two new programs to support firms with an annual turnover of more than 300 million reais ($53 million) in sectors such as aviation, autos, non-food retail, sugar-alcohol and electrical energy.

Work and pensions secretary Bruno Bianco said at the news conference that government measures to reduce workers’ hours and salaries have saved around 4 million jobs.