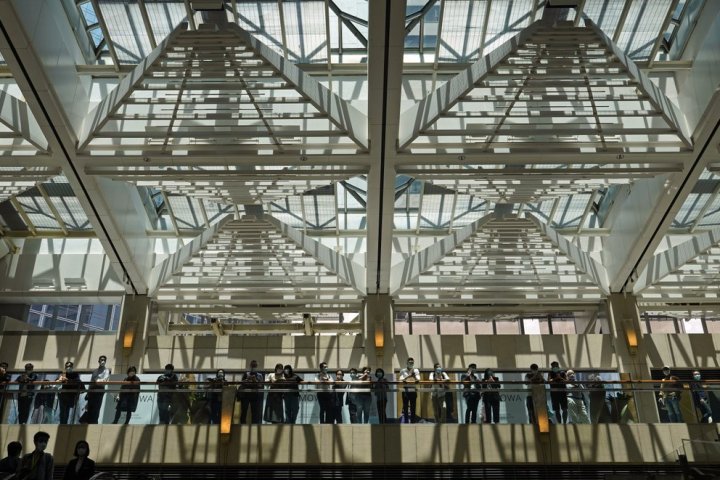 Demonstrators chanted pro-democracy slogans in a luxury mall in Hong Kong on Wednesday, the latest in a string of small but determined protests as the city’s coronavirus outbreak slows.

More than 100 protesters gathered at lunchtime in the Landmark Atrium mall in Central, a prestigious business and retail district, despite social distancing rules that prohibit public gatherings of more than four.

“The protests had calmed down previously because of the coronavirus, but now we must step up and let the world know that we have not given up,” said Mich Chan, who works in the legal industry. “We’re still fighting for what we fought for last year.”

Holding up a sign calling for the movement’s five demands to be met, Chan said she was not worried about possible transmission of the virus during the protests because the people of Hong Kong are “disciplined and know how to protect themselves” by wearing masks.

Police entered the mall about half an hour after the protest began, urging people to leave and warning those assembled that they were violating social distancing rules and participating in an unlawful assembly. The police detained several protesters but later let them go, with no arrests made.

The protest followed similar ones in malls on Sunday and Tuesday in which police dispersed the crowds. They are a continuation of a movement that began last June to protest an extradition bill that would have allowed detainees in Hong Kong to be transferred to mainland China. Although the bill was later withdrawn, the demonstrations continued, with protesters demanding full democracy and an independent inquiry into police behaviour.

Organizers are planning further protests in May, with an eye to a major march on July 1, the day when Britain returned Hong Kong to China in 1997. Activists expect protesters to return to the streets again, as the city’s daily virus cases have dwindled to single digits for over two weeks.

Adrian Wong, who works in banking, said he came out to protest despite worries about the coronavirus.

“I am concerned about the virus but I think I still have to come out, so that Hong Kong’s people won’t forget what happened in the last year,” Wong said. “The violence of the Hong Kong police force is destroying Hong Kong, and the five demands have not been met yet.”

The protests this month are also fueled by the perception that mainland China is interfering in Hong Kong’s affairs, after Beijing’s liaison office accused pan-democrat lawmakers of damaging public interest by filibustering and delaying the election of a chairman of the Legislative Council House Committee.