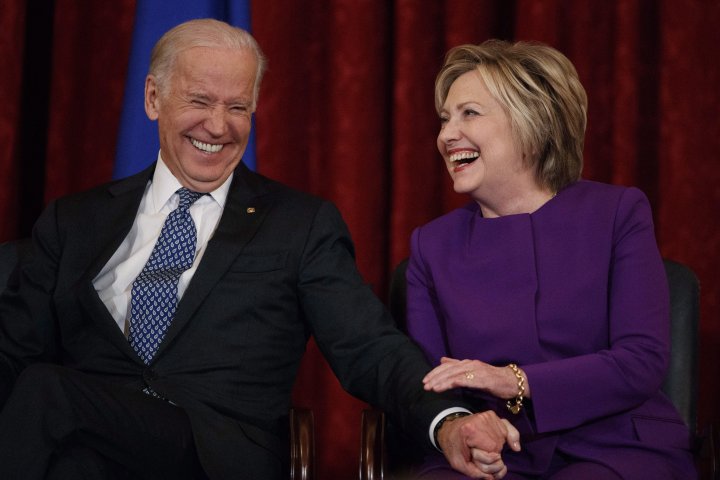 Presumptive Democratic presidential nominee Joe Biden won the endorsement on Tuesday of Hillary Clinton for the office she fell short of winning in 2016 in her bid to become the first woman elected as U.S. president.

The endorsement, at an online town hall on the effects of the coronavirus crisis on women, came at a critical moment as Biden aims to raise his profile with female voters and other key demographic groups even as the pandemic ravages the U.S. economy.

Clinton — a onetime secretary of state, U.S. senator from New York and first lady — suffered an upset defeat in the 2016 presidential election to Republican Donald Trump, despite winning the popular vote.

She also lost the 2008 Democratic presidential race to Barack Obama, whom Biden served as vice president.

Biden, who has vowed to pick a woman as his running mate this year, introduced Clinton at the town hall as the person who should be now be president.

Clinton told the former vice president: “I am thrilled to be part of your campaign to not only endorse you but to help highlight a lot of the issues that are at stake in this presidential election.”

Clinton’s defeat four years ago remains the source of anger and consternation among liberals, including some who wrestle with whether they chose the right candidate.

Women favored Clinton over Trump in 2016, exit polls showed, and are expected to play a critical role in swaying the most competitive swing states in the Nov. 3 election between Biden and Trump.

On Tuesday, Biden and Clinton promoted the need to define abortion as essential healthcare during the coronavirus pandemic and to provide subsidies to victims of domestic violence forced to take time off from work.

The former first lady’s signature issue during the presidency of her husband, Bill Clinton, was healthcare reform, and her early career included advocacy on family and children’s issues. Speaking on the webcast, she said women were disproportionately hurt by some of the consequences of the pandemic.

Biden agreed, adding that abortion was being used as “a political wedge” during the crisis. Some Republican-led states have sought to curb the procedure as part of their emergency response.

In a statement responding to the endorsement, Trump’s campaign manager, Brad Parscale, said: “There is no greater concentration of Democrat establishment than Joe Biden and Hillary Clinton together.”