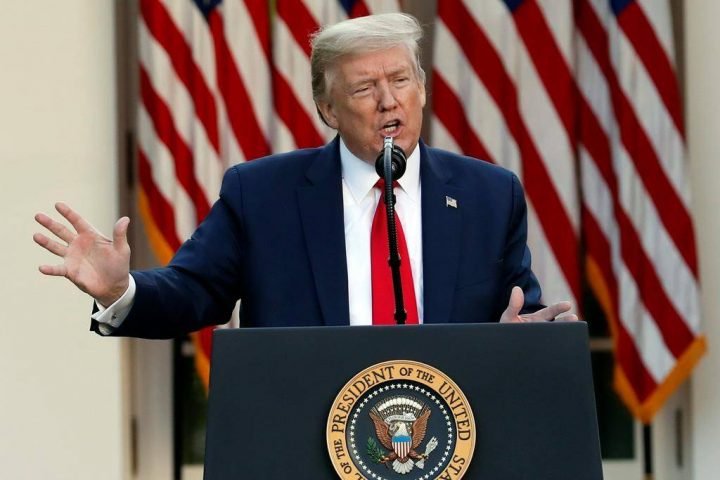 U.S. President Donald Trump said Wednesday the federal government will not be extending its coronavirus social distancing guidelines once they expire Thursday, and his son-in-law and adviser, Jared Kushner, predicted that by July the country will be “really rocking again.”

Putting a positive face on the latest grim numbers — the U.S. death toll has now surpassed the Vietnam War — Trump delivered his daily upbeat update and Kushner described the administration’s much-criticized response to the pandemic as “a great success story.”

Trump also talked up the good news the day provided: Hopeful results for a possible COVID-19 treatment. But the government announced dismal new economic numbers as the pandemic took hold and shut down much of the country.

The U.S. economy shrank at a 4.8 per cent annual rate in first quarter of the year — a precursor to far grimmer reports that are expected this summer from the severe recession triggered by the pandemic.

The White House has been trying to pivot to a new stage of the crisis, focused on efforts to reopen the nation’s economy state-by-state amid concerns that lifting restrictions too quickly and without sufficient testing and contact tracing will spur a resurgence.

As part of that effort, Trump, who has both threatened to force states to reopen and said decisions will be left to them, said the White House will not be extending its “30 Days to Slow the Spread” guidelines when they expire Thursday.

“They’ll be fading out because now the governors are doing it,” Trump told reporters in the Oval Office as he met with John Bel Edwards, the Democratic governor of Louisiana.

Those guidelines — which were originally supposed to last 15 days and were then extended an additional 30 — encouraged Americans to work from home and avoid restaurants and discretionary travel and advised older Americans and those with serious underlying health conditions to isolate themselves.

Vice-President Mike Pence said the guidelines have been incorporated into the new guidance issued by the White House earlier this month that lays out how states can gradually ease restrictions and begin to reopen as the rate of new cases slows.

Edwards, who recently extended Louisiana’s stay-at-home order through May 15, is currently under fire from Republican lawmakers in his state after he extended Louisiana’s stay-at-home order through May 15. As he was in Washington, some GOP legislators were trying to rally support to take the extraordinary step of trying to override the governor’s emergency decision-making about the state’s outbreak.

But Trump commended Edwards on the job he’s done after New Orleans became one of the nation’s coronavirus hot spots. “I just wanted to congratulate you,” Trump said.