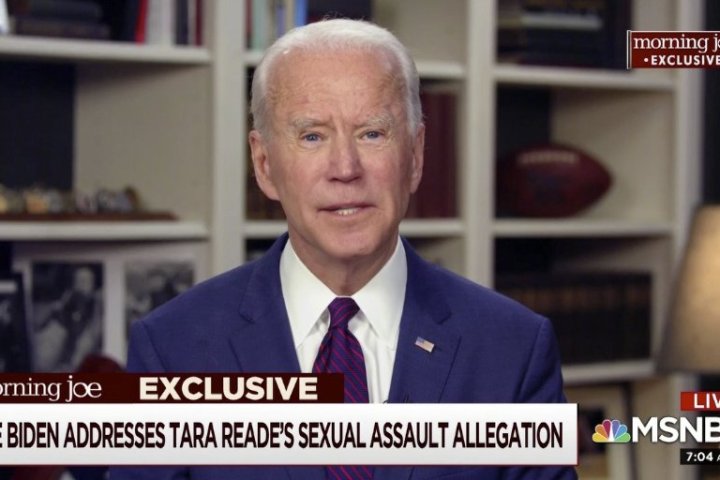 Democratic presidential candidate Joe Biden on Friday categorically denied allegations from a former Senate staffer that he sexually assaulted her in the early 1990s, saying “this never happened.” Biden’s first public remarks on the allegation by former staffer Tara Reade come at a critical moment for the presumptive Democratic nominee as he tries to relieve mounting pressure after weeks of leaving denials to his campaign.

“I’m saying unequivocally, it never, never happened,” Biden said in an interview on MSNBC’s “Morning Joe.” Biden said he will ask the National Archives to determine whether there is any record of such a complaint being filed, but he said repeatedly that he doesn’t believe such a record exists.

“The former staffer has said she filed a complaint back in 1993,” Biden said. “But she does not have a record of this alleged complaint. The papers from my Senate years that I donated to the University of Delaware do not contain personnel files.”

Republicans worried about President Donald Trump’s increasingly precarious political standing are seizing on the allegation to portray Democrats as hypocrites who only defend women who allege wrongdoing against conservatives. They are digging in despite the fact that it could renew attention on the multiple sexual assault allegations lodged against Trump.

Democrats, meanwhile, are in an awkward position of vigorously validating women who come forward with their stories while defending the man who will be their standard-bearer in what many in the party consider the most important election of their lifetimes.

“The campaign has issued statements, but he hasn’t issued any statements in his own voice,” said former Democratic National Committee Chairwoman Donna Brazile. “It’s not helping, it’s just damaging — not only to the person who has come forward, but it’s also damaging the candidate.”

The November contest between Biden and Trump will be the first presidential race of the #MeToo era, which has led numerous women to come forward with allegations of sexual assault. Trump has been accused of assault and unwanted touching by numerous women, allegations he denies.

Women are a core constituency for Democrats, and Biden has a mixed history. While he wrote the Violence Against Women Act as a senator, he also came under heavy criticism for his handling of Anita Hill’s Senate testimony in the 1990s. Just before he launched his 2020 campaign, several women accused him of unwanted touching, behavior for which he apologized.

Biden has pledged to pick a woman as a running mate, and the allegation has left those thought to be in contention in a tough spot.

“Women deserve to be heard,” she said, “but I also believe that those allegations have to be investigated by credible sources.”