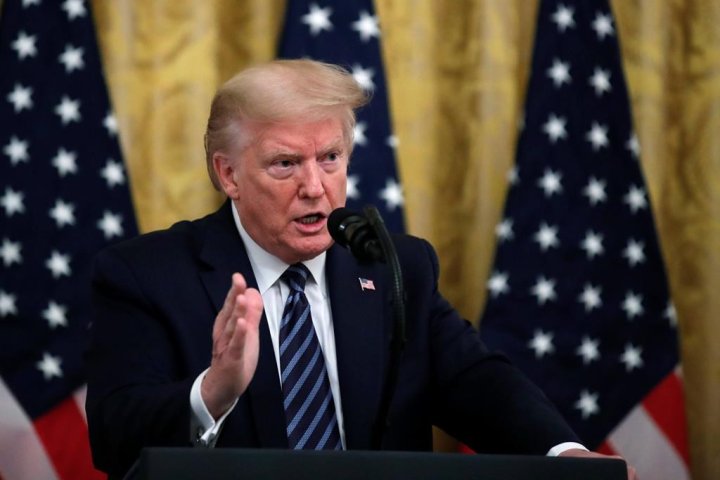 U.S. President Donald Trump said Thursday that he believes the U.S. can never declare “total victory” over the coronavirus because too many people have died.

But he added that he will count it a win when the virus is gone and the economy fully reopened.

With more than 60,000 Americans fallen to the virus, Trump pointed out that the death rate in the U.S. was lower than in many other countries, and he offered the optimistic prediction that the battered economy would be vastly improved in a matter of months and “spectacular” by 2021.

He also said he was considering ordering that U.S. flags at the White House and elsewhere be lowered to half-staff to honour those killed by the virus — now more than all U.S. troops killed during the Vietnam War — as he pushed back against criticism from presumptive Democratic presidential nominee Joe Biden that he lacks “empathy or concern” for Americans.

“I want the virus gone, and we want to have a vibrant economy,” Trump said at a White House event designed to highlight the administration’s efforts to protect residents of nursing homes grappling with the virus.

Speaking of the nation overall, Trump said he didn’t want people “sitting 6 feet apart. I want our country back. I want people to go out and see football games and baseball games and basketball and hockey and golf and all of these sports and not worry about getting sick and violently ill.”

You should also READ  Wet’suwet’en protests and arrests: Here’s a look at what’s happening now

Earlier in the week, Biden called on Trump to order White House flags to be lowered to half-staff and accused the president of talking more about how he’s been inconvenienced by the virus than about Americans affected by the pandemic.

Asked about Biden’s criticism, Trump said lowering the flags was among the steps he would be discussing with his advisers later Thursday as he considers how to honour the fallen. He also dismissed Biden’s criticism.

“I don’t think anybody can feel any worse than I do about all of the death and destruction that is so needless,” Trump said. “Nobody’s thinking about it more. Nobody has spent more time, late in the evening, thinking about what’s happened to this country in a short period of time. But at the same time, we have to get our country open again.”

Trump is trying to turn the page on the virus, even as the nation’s death toll continues to climb and jobless claims rise.

While economists are warning of serious long-term economic damage, Trump is predicting a strong fourth quarter thanks to pent-up demand.

‘I ran out of space’: N.Y. funeral home under fire for storage of coronavirus victims