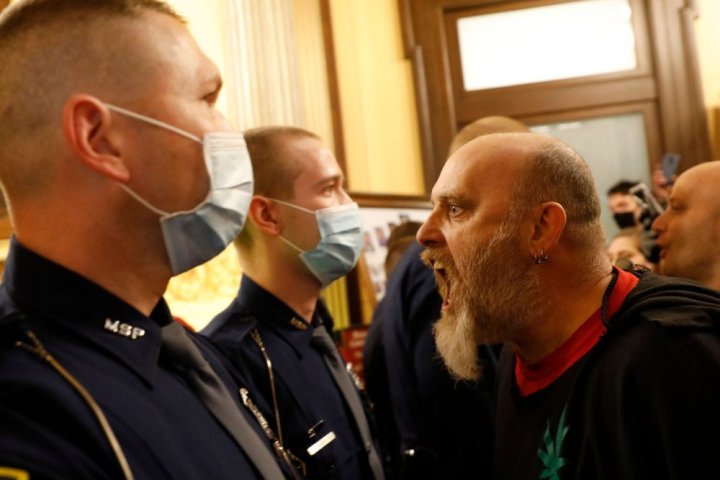 U.S. President Donald Trump described hundreds of armed, primarily white protesters who stormed the Michigan Capitol building as “very good people,” amid accusations that the gun-toting demonstrators were acting like “terrorists” in the way they protested the state’s coronavirus lockdown.

Many of the protesters showed up with AR-15 rifles, tactical gear and a mix of camouflage and star-spangled apparel for their “American Patriot Rally” at the state capitol in Lansing, Mich., on Thursday. The group crowded into the state capitol building and tried to force its way past Michigan State Police to break up a meeting about the crisis, while chanting for the state to end the lockdowns.

One striking photo captured at the event shows a bearded man screaming in the faces of masked Michigan State Police. The image provoked intense backlash on social media, where many described the group as “Michigan terrorists.”

Critics also suggested that the protests showed the difference between how white and Black protesters are treated, because police did not use force against the armed far-right group.

“White privilege is being able to storm the Michigan state capitol heavily armed and not be treated like a criminal,” one woman said on Twitter.

Video captured from the protest shows the bearded man screaming “Hey Redcoat!” at the police, in what appears to be a reference to the American Revolutionary War.

It was the latest in a series of protests — many of them led by far-right groups — that have demanded an easing of restrictions meant to stop the spread of COVID-19 in the state. Much of their fury has been directed at Gov. Gretchen Whitmer, a Democrat and frequent Trump target who has imposed some of the most sweeping lockdowns in the United States.