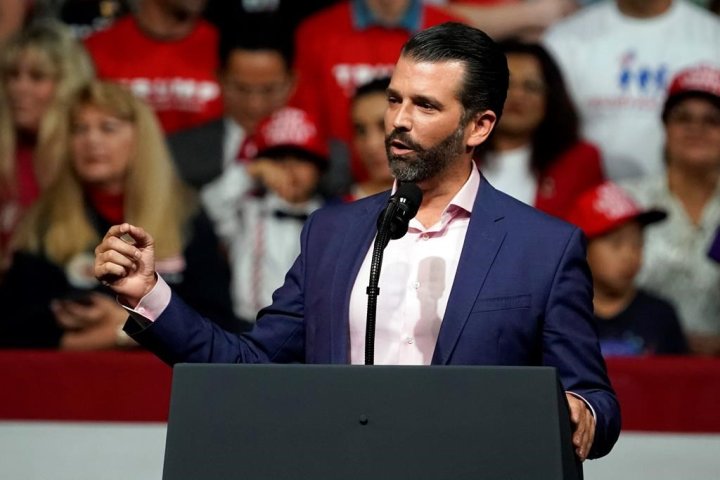 The streaming video began and, within minutes, the president’s eldest son was musing that Osama bin Laden had endorsed Joe Biden.

Subtle, it was not. Welcome to the Trump campaign, digital edition.

Seven nights a week, U.S. President Donald Trump’s reelection team is airing live programming online to replace his trademark rallies made impossible for now by the coronavirus pandemic. Hosted by top campaign officials, prominent Republicans and “Make America Great Again” luminaries, the freewheeling shows offer reality according to Trump. The shows are an effort to stay connected with core supporters and maintain enthusiasm for a suspended campaign that has had to rewire itself on the fly. Trump himself has not yet appeared in his campaign’s shows.

A review of one week’s worth of the 8 p.m. broadcasts, ending on the final day of April, reveals a concerted effort to test attacks on Biden, the presumptive Democratic nominee. But the inherently limited effort also raises questions as to whether the campaign can replace the gold mines of potentially new voter data that the rallies delivered as it attempts to reverse a recent slide in a number of battleground states.

The shows are a proxy for the “Trump TV” network the president considered launching had he lost the 2016 election, and they create an echo chamber for true believers. Akin to actors in a beloved sitcom well into its run, the Trump officials warmly speak in shorthand, trusting that their audience knows the plot and its characters and are tuning in to see programs that, at times, made the president’s infamously off-the-cuff rallies look tightly scripted.

You should also READ  Gordon Sondland, a key impeachment witness, says Trump intends to recall him

Trump Jr. had seized upon an oddly timed recent Fox News story, which in itself was drawn from 2012 reporting that bin Laden, the late al-Qaida leader, had once proposed assassinating President Barack Obama because doing so would thrust Biden into power and the then-vice-president was “totally unprepared for that post,” in bin Laden’s estimation. Trump cackled while sitting on the couch next to his girlfriend, former Fox News host Kimberly Guilfoyle, and looked into his Skype camera to declare that even bin Laden knew that Biden “would destroy America.”

After Guilfoyle went to cook dinner — it was the couple’s second anniversary that night — the president’s son, joined by Republican National Committee official Chris Carr and GOP operative David Bossie, continued to make politically incorrect observations that would draw more scrutiny if they were made anywhere other than a fans-only online broadcast.

“China basically screwed the whole world with their lies” about the origin of the coronavirus, Trump Jr. said, before addressing the theory that the pandemic began in a live-animal “wet market” in Wuhan, the epicenter of the Chinese outbreak. “The world would be a better place if China cared a little more about feeding their own people so they don’t have to eat bats. I don’t know, just a casual observation.”

Since the Trump campaign went fully virtual on March 13, each video has received at least 1 million hits, according to campaign spokeswoman Erin Perrine. She added that the shows drew more than 300 million combined views in April across all of its platforms: Facebook, YouTube, Twitter, Twitch, Mixr, and the campaign’s own website, with Facebook by far the biggest source of traffic.

Tuesday’s installment, which featured House GOP leader Kevin McCarthy of California, had received 10,943 views on YouTube as of mid-Friday morning. The campaign declined to release any information as to what it could glean in terms of the identify or demographics or hometown of its viewers, all of which was mined from rally sign-ups.