‘A symbol of hatred’: Shopper spotted in KKK hood under coronavirus mask rule in California 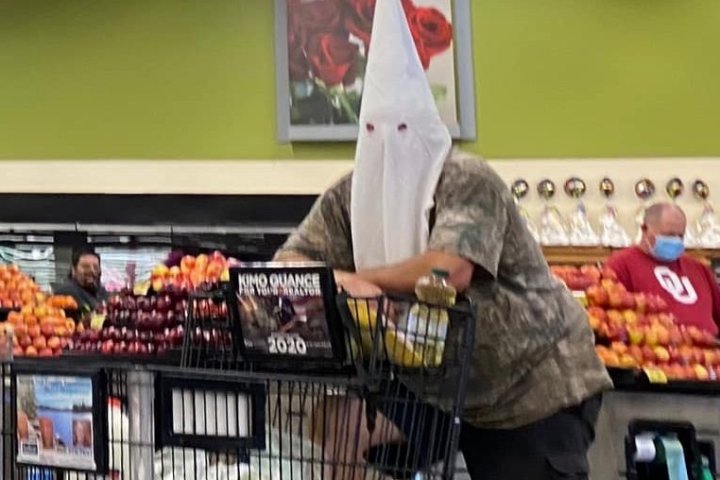 A man has been spotted wearing a racist Ku Klux Klan (KKK) hood to a grocery store in San Diego County, Calif., where face masks are mandatory in public under local coronavirus rules.

Several photos and videos circulating online show the man shopping while wearing the tall, pointy white KKK hood at a Vons grocery store in Santee, Calif., on Saturday. He also wore a camouflage T-shirt and dark shorts, and had a long, scraggly grey ponytail hanging down his back.

“I was in disbelief,” witness Melissa S. told the Times of San Diego. “He was standing behind me in line, standing quietly,” said Melissa, who asked not to have her last name released. She was among several people who took photos and shared them online.

Melissa said another man in a wheelchair “saluted” the man in the hood at one point.

“I took the photo because I couldn’t believe what I was witnessing,” she said.

Clerks repeatedly asked the man to remove the hood or leave the store, a spokesperson for Vons grocery stores told the L.A. Times. He eventually removed the hood after a store supervisor told him to do so in the check-out line, the spokesperson said.

“Several employees came over together and told the man to either remove the hood or he would have to leave, so he removed the hood,” witness Tiam Tellez confirmed in a post on Facebook, where he shared several images of the man.

You should also READ  ‘We were wrong’: Commissioner says NFL should have listened to player protests

The San Diego Sheriff’s Department was not called about the initial incident but is now looking into the matter, it said in a statement on Monday.

Tammy Gillies, regional director of the Anti-Defamation League of San Diego, condemned the incident and called for justice in a tweet on Sunday. She also questioned the grocery store’s seemingly slow response to the incident, and offered to “educate” its staff on the issue.

“San Diego is #NoPlaceForHate,” she wrote.